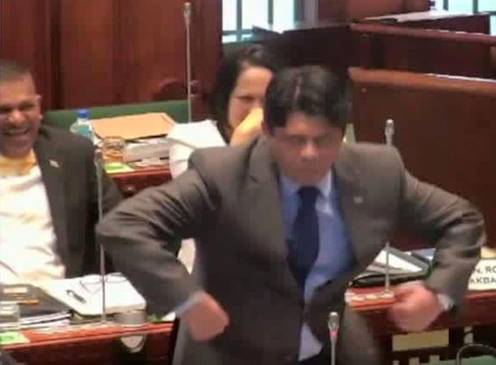 Fiji citizens, post 2006 coup to 2015 has been under an oppressive regime. The election of September, 2014 was a tilted one which saw the same coup perpetrators gaining seats in Fiji Parliament, as the governing party under Voreqe Bainimarama and his advisor Aiyaz Saiyed-Khaiyum.

We demand that Aiyaz Saiyed-Khaiyum be removed by legal means from Fiji's Parliament immediately.

His recent racist behavior inside Fiji Parliament, as Acting Prime Minister of Fiji against one of our Fijian Indigenous Parliamentarian is the lowest one can get in intimidating the Fijian Race in Fiji.

Wednesday, 18 November, 2015, Hon. MP. "Ratu Isoa Tikoca accused Aiyaz Sayed-Khaiyum of corruption, claiming he had proof of it in documents he tabled on Friday.

Ratu Isoa says Mr Sayed-Khaiyum then imitated his voice, made grunting noises, and raised his arms in an ape-like gesture towards him, which he labelled a racist gesture to iTaukei." (RadioNZ), http://www.radionz.co.nz/international/pacific-news/290293/fiji-finance-minister-accused-of-racism-for-'ape-gesture'

Khaiyum has been instrumental in the deconstruction of the Fijian Race under his inafmous 'Sunset Clause' agenda in which his thesis had been based on. Post 2006 coup to todate, Fijians i.e Indigenous have witnessed the gradual deconstruction of their Cultural heritage, Fijian Identity, Fijian Great Council of Chiefs and tampering with sacred historical information and/or data kept at the Fijian Native Land Trust Board & Fijian Native Land Commissions in Suva.

NO ONE IS ABOVE THE LAW

Khaiyum has not been charged for making false and reckless declarations twice in breach of section 27 (a), (b) and (c) of the Political Parties Registration Decree?

On or about 4 June 2014, Aiyaz Sayed Khaiyum made declarations whereby he omitted particulars relating to his 99% shareholding in Midlife Investments limited (MIL).
For sake of completeness and clarity, please note that there were absolutely no mention whatsoever about his 99% shares in (MIL)

On both occasions stated above, Aiyaz Sayed Khaiyum understated the value of the land he purportedly owned through (MIL) by at least $19,000 given that the purchase price of the land was $100,000 in 2006.

Aiyaz Sayed Khaiyum on 23 October 2015 on National TV told the people of Fiji that he held 20% shares in MIL.

Aiyaz Sayed Khaiyum therefore attempted to mislead the public by insinuating that he was a minority shareholder of (MIL) contrary to the company returns from 2006 -2014 which proves he holds 99% shares in (MIL).