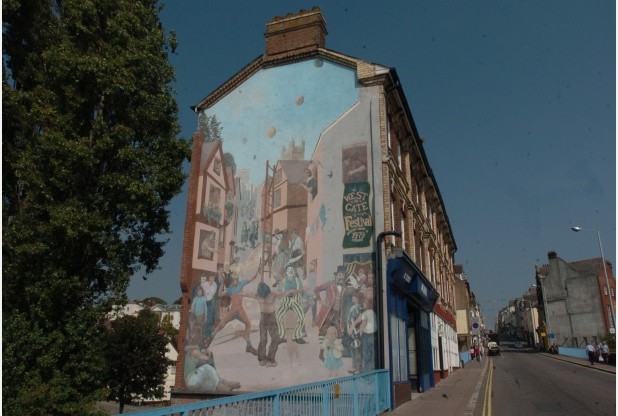 Please help and show your support!!!

The Iconic Exeter wall mural is to be covered up after 35 years.

The Westgate mural, which has stood at the bottom of New Bridge Street, overlooking Exe Bridges for 35 years this month, is being painted over.

The mural, which was suggested for listing by the Twentieth Century Society, was painted by local artist Andrew Stacey who also completed the mural on the Backpackers’ building in Holloway Street.

The New Bridge Street mural which is 60 foot high and 40 ft wide is to disappear.

it is thought the owner of the building is trying to sort out some ongoing rendering problems. It was hoped to save the mural but this proved not possible.

The mural was painted by Andrew Stacey, a former Exeter College art teacher, to celebrate the Westgate Festival in 1979, and features local characters of the time and acrobats and jugglers performing in the streets of the city.

With some funding the mural could be repaired after the work to the building is done.