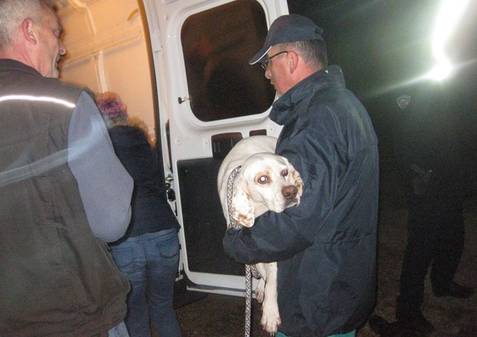 4537 people have signed this petition. Add your name now!

UPDATE: we successfully managed to gain 1000 signatures, so let us try to gain 10 000. Thank you all so much! The dogs are promised to be returned to the shelter, however they still haven't been returned. Also, nobody is still mentioning the promised REAL shelter apart of the makeshift one. With 10 000 signatures we will be able to make more of an impact on the City.

After years of a long and painful battle between the Humane society of Dubrovnik and the City of Dubrovnik officials the horror escalated. On the night between December 20th and 21st 2015 Dubrovnik police department with more than 50 armed officers entered the NO KILL animal shelter on Zarkovica in Dubrovnik. Over 350 animals have been ABDUCTED without any court order, and taken all over the country to the KILL SHELTERS in which they are now given 60 days before being euthanized.

The no kill shelter was the only animal shelter in the county. It was funded by the volunteers as nobody from the city officials wanted to finance it even though it was planned in the city budget.

Sisters Sandra and Anica Sambrailo decided more than 15 years ago that it is enough of dog murders in Dubrovnik - the tourist capital of Croatia and Game of Thrones famous destination - King's Landing. Up until 20years ago, the dogs were taken on a hill nearby and they would be shot. Also, there were insane amounts of dog poisonings in the city.

The location where the NO KILL shelter was set up is a location of the highest tourist priority to the city officials however legally they are unable to gain access to it. They needed to do something illegal such as what they did last night, and then hope for the people to stop talking about it. The members of the Humane society said that they would leave the premises if and when given the 15 YEARS AGO promised animal shelter. The shelter was never built, and now, without any court order, they were forcefully taken away.

Sandra has recently won Dubrovnik volunteer of the year for her selfless devotion to caring for these dogs but has been arrested and her father is in hospital ...All because she asked the mayor to fulfil his promise of providing support and a proper shelter for these poor creatures and sadly as the mayor has ordered this clearing of the existing volunteer shelter it is legal ...

We are requesting the mayor Andro Vlahusic to resign, as the main responsible party in this case. Mainly, we are requesting for ALL of the dogs that were taken away to be returned to the Humane Society Dubrovnik.

More than 350 lives WILL be lost unless we react!

We are their only hope!

SANDRA SAMBRAILO is a great individual , who, for almost 15 years , is taking care of homeless dogs and cats, providing them shelter and home..
At the same time, The City officials were issuing empty promises.

Sandra is a great individual, a War veteran, who defended her City of Dubrovnik and its citizens.
Sandra is a great individual who made possible that Mayor 'The Great" , drives very expensive car , while she is in debt , money needed for the makeshift shelter, for which The City of Dubrovnik had a duty, and still has, to build decent shelter for animals in need
There is a great number of people who signed The Petition to save animals on the mountain of Zarkovica, as they had heard recently, that animals might be taken to KIll shelters.

And today is the news that Sandra Sambrailo has been taken to prison.. !!! Like the biggest criminal..

Because she defended innocent animals of Dubrovnik.. Those dogs and cats that people don't want any more. They are left alone on the streets, and forests to look after themselves..

On the other hand we have Zdenka Filipovic.. She sure can smell the money scent , and that for her - the most glorius moment.. She turns into a person without any scrupules.
It seems that , in that moment , for her only Sky Is he Limit.
Therefore, she showed up , this morning, on the mountain of Zarkovica, at 2:30 a m , with police and STOLE dogs from the shelter..
Because she works in that fashion, and she doesn't know otherwise.
Because she doesn't know for Love and Respect
Because she doesn't like animals, but profit they bring along.
The Mayor of Dubrovnik is the most narcissistic individual, at the same time , primitive , who doesnt do a thing ..
Absolutely Nothing !!!
He only keeps signing the contracts, which are not good for the Town ,and residents, and his duties as a Mayor are left unfulfilled.

Dear people, it is time !!!
IT IS TIME FOR ALL OF US TO STAND UP AND GIVE SUPPORT FOR SANDRA AND HER BELOVED ANIMALS ON THE MOUNTAIN OF ZARKOVICA !!!

Does Power that be has to win always?

Please, if have not yet visited Facebook page for the protection of animals in Dubrovnik, now it's the time. Please, give any kind of support.
What is going on now, is beyond words. And how much money, really, can you make on homeless and left alone?
It was done in Split so-so, why it cannot be done in Dubrovnik, as well ?

This is the time when all Civil Instituitions have to work together, with all the citizens of Croatia.
This is Big fight for the lives of 400 innocent souls. Please , protect dogs of Dubrovnik.

If you are silent, you wont be any different from the "lady' in stilettoes pictured on the photo, who looks at World from above, from all the wrong f....ing heights ..
Very long time, too long.

PLEASE BE THE VOICE for those who cannot talk, who are freightened at the moment, confused, alone, taken from the only home they have ever known.