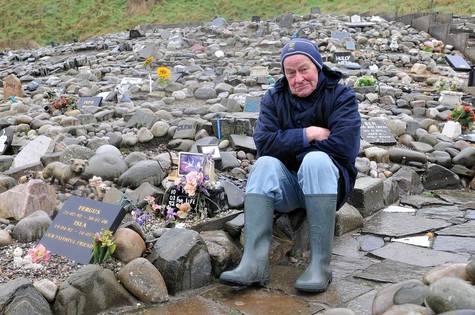 Ok so think most people are aware of the ongoing issue with Cullen pet cemetery .

It was stated that stevie was encroaching boundaries where he was not ment to be and accused of burying animals in places he shouldn't be .

So he had received a letter stating this and asked him to remove slabs and stones from that area which he did .

We have now has an official response from seafield estates which clarifies their issue . This I'll post at the bottom of the post .

They are willing to help stevie expand the cemetery and work with him to make sure the safety of the cemetery which is great news .

Councillor Ron Shepard has also shown his support and willing to write a letter of support .

The petition I think now should be focused on what stevie has done for the community and how he has dedicated 25 years of his time to making it so nice and a tourist attraction for Cullen and of course a comfort for a lot of people who have lost their pets .

Along with the letters of support and the petition and news reports I'm sure this time it will succeed and finally gets the recognition he deserves.

So if anyone would like to show support and praise for stevie and what it means to them and the community in the way of a letter please private message me and I can collect anything and attach this to all the other forms that need to be sent back to cabinet office . Thanks for all the support and stevie I herd is overwhelmed by the kind words and messages .

Note the section that the land is of "scientific interest".

Seafield Estate has been supporting this site for 20 years and will continue to do so. This will include further meetings with Mr Findlay and members of the Cullen Community to ensure that the future of the pet cemetery is safeguarded, as we all recognise that he will not be able to continue his work indefinitely.

The Estate is also totally in support of Mr Findlay receiving public recognition for his commendable work. We endorse his efforts wholeheartedly and would be happy to lend our support to a campaign to have him honoured in some way. If more land is needed then the Estate, as before, will accommodate this but to protect Mr Findlay’s hard work we have to ensure that any expansion does not encroach on the designated 'Site of Special Scientific Interest', as this is of National importance and has its own statutory protection that the Estate must recognise in any land management.

I hope this clarifies the position for you but if you wish to discuss this further I would ask that you telephone the office to arrange a suitable time for us to meet.