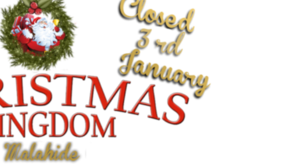 This is a petition from the vast majority of the community of Malahide who feel have had no say in the abrupt cancellation of Christmas Kingdom. We are in favour of this event. Our voices and viewpoints have been unheard. A meeting was held today by a small minority of the community against said event. We also ask to be properly informed as to whom and why his event was ultimately cancelled. This meeting was not well publicised and it's outcome judging by the deluge of social media response, is not the outcome that most local residents are in favour of.

We ask that the event be reinstated, or a public meeting organised so that the entire community can be heard.

Many of the local children are devastated by today's outcome having been eagerly awaiting this event. Many businesses will suffer also by this decision.

Bring back the spirit of Christmas to our village. We are the voices of the community and we ask to be heard.

The people of Malahide