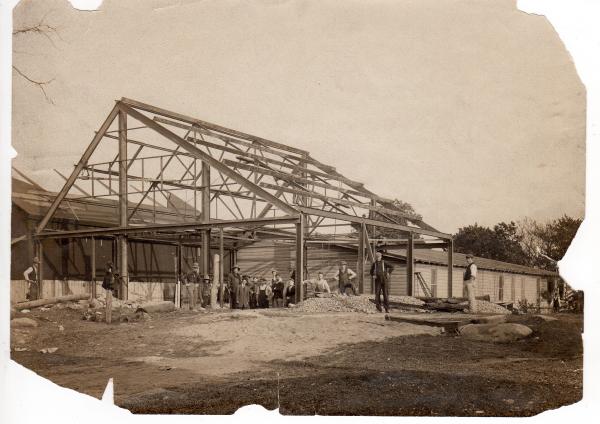 SAVE CHAMPION STUDIO , THE OLDEST STANDING STUDIO IN THE USA!

The Fort Lee Film Commission asks you to sign our online petition to save the Champion Studio, which is the oldest standing studio building left in the United States. Built in 1910, it was purchased by movie pioneer Carl Laemmle in 12 and became the first home to Universal Studios when that studio was born in 1912. Universal owned and operated the studio until 1923 when it was sold for use as a printing plant, which it was until mid 2013. Since then the building has been sold and is before the Englewood Cliffs, NJ Zoning Board as the new owner plans to demolish the building and replace it with a new building.
Though the building sits a few feet from the Fort Lee border in Englewood Cliffs, NJ, all primary source material from the time the studio plant was in operation indicate it was considered located in the Coytesville section of Fort Lee. The Fort Lee Film Commission has won a Bergen County History Grant to produce a documentary of the history of this studio and the work is presently in post production. We are working with the Englewood Cliffs Historical Committee to bring greater awareness to the history of this site.
Please sign and pass along this petition. The Fort Lee Film Commission will present the petition to the Englewood Cliffs Mayor & Council and we would like the deadline for signatures to be January 1, 2014 as our time is limited as the building may come down anytime if the Englewood Cliffs Zoning Board grants the variance.
Please help us save this most important piece of world cinema history.|See the link below for a recent article about this fight to save our history:
http://www.northjersey.com/community/history/more_history_news/In_Englewood_Cliffs_a_part_of_movie_history_is_facing_destruction_.html