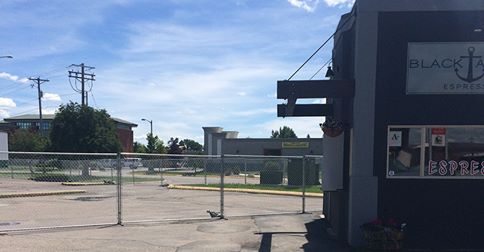 In today's economy, it's hard enough to start a business and make a sustainable profit. Much less one that is a huge success within the first few months. But that is exactly what happened with Black Anchor Espresso.

Michelle Riska has developed a strong and loyal following. BAE has become a morning destination for several hundred Flathead Valley residents. It has also become job creator and a consumer of goods & services of other local businesses.

Now this successful & extremely popular establishment has been forced to drastically reduce its service to the community because of former U.S. Congressman Denny Rehberg's new Burger King. The construction, and future site development, has virtually stopped the flow of traffic that once crossed the corner of the Rehberg's lot.

Even though the few feet necessary to reopen BAE's traffic lanes would do little if anything to hinder the flow of traffic to the new Burger King, the Rehbergs have decided to move forward with plans to permanently block access to, and exit from the south side of Black Anchor Espresso.

Please join us today and make your voice heard. We are asking for a very small easement through an otherwise virtually unused portion of the new Burger King's parking lot. It is estimated that the equivalent of only two parking spaces would be eliminated if the easement were granted. This space is currently scheduled to be turned into landscaping, with a few boulders placed where BAE's traffic flow could be.