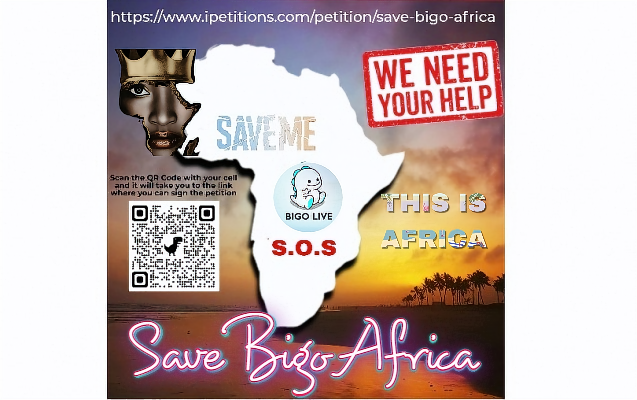 Please support our cause in favour of all Bigo hosts within the African Region to trade freely and fairly without restrictions as being currently imposed by Bigo currently.

With the recent Salary adjustments that has been implemented from 1 March 2022 where the African hosts' salaries were decreased by over 20%, this will severely impact the livelihood of all in the African region. This is the second salary cut in just over three months. Many hosts from African countries use Bigo as their sole source of income to feed their families, and to decrease these salaries will further increase their hardship. Many African Hosts has already embarked on a hosting and recharge strike where until this matter is resolved. This matter is of utmost importance.

At this current stage, All African and American Hosts are affected by this rule where every bean that is gifted to an American host, the value of that bean is only 20%. This has severely affected not only the bean trading partner relationship between Hosts between Africa and the USA but it has impacted largely on African’s host’s target whereby American Hosts no longer see the value of trade with their African counterparts as they do not see the economic value of the beans from the African region. This has severely impacted on the broadcasters’ targets which decreased resulting in lower salaries, impacting on their standards of living, which has dropped considerably.

Due to the shortage of jobs in the African region, many hosts resort to Bigo as a form of income and by the introduction of these new rules, makes it close to impossible to perform any economic trade between the two regions.

Many American (Western Region) hosts, see that receiving beans from African countries as futile and unprofitable. Even simple trades being done between hosts of countries from these regions have stopped because of this rule. Instead of encouraging economic grown between these Countries, Bigo is discouraging it. This is a simple dampen on the region’s basic human rights.

As from 1 November 2021, African Hosts that were white listed and registered legally in American families were no longer to partake in BYOB (Bring Your Own Buddy) Rebate PKs. Bigo has not provided an alternative rebate PK for the affected registered hosts. This has AGAIN grossly influenced their targets and ultimately affected hosts’ livelihood.

It has also found that since the OPAY system has been discontinued, Many African hosts have found that the Payoneer system is unfair to local hosts in that when cashing out and hosts are forced to cash out in the US dollar currency, the African hosts are penalised heavily by their local banks in the form of charges which makes the situation more difficult.

Africa as well as many other European Countries excluded from “In-Region” rebate PK lists.

As from 1 November 2021 a new rule was introduced whereby beans had to come from certain areas and if the beans would come from out of region, they would not count towards hosts’ rebate.

In-region host (USA) are also extremely affected because support during PKS and normal lives come from all over the world and allows them to think they have made target, but ends up being out of region beans. This in effect makes them uncomfortable to trade with any out of region hosts, causing unintended discrimination and victimization.

Bigo Live, being a World-Wide Application is applying territorial limitations whereby only beans from certain areas are allowed in various events such as the Rebate PKs.

Trading Partners such as Germany, France, Netherlands, Greece, Italy are just some of the European countries that are excluded from the BYOB PKs. Not to mention countries from the east, such as Japan, China, Korea, etc. The hugest impact has been experienced within South Africa and Nigeria where there is huge support between USA and the African countries.

Some approved white listed USA family members who have done rebate PKs struggle to get their rebates. Some are owed over 3 dragons worth of rebates which Bigo are not resolving.

Some African Hosts that were having targets in excess of 180,000 now cannot even reach 80,000 in one month. This is all because of the new rules that has been implemented. The saddest thing is that instead of building or encouraging people, Bigo is discouraging and frustrating people. Instead of attracting people to the app, you are discouraging and chasing people away from the app, taking away their bread and butter.

We appeal to Bigo to scrap these rules or we will have no alternative but to stop supporting Bigo and support other applications where there are far less restrictions and hosts are able to enjoy the application with much less stress.

We are awilling to meet with Bigo Management to discuss and address the matters noted above.

We ask you to hear our plea.