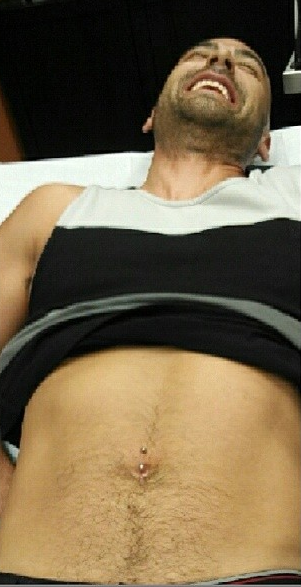 Friends, family, and concerned citizens… I don’t usually do things like this, but this is important.

In 2013, right before the 2013-2014 NBA season started, a few friends got together and made a bet. Everyone chose a team, and if any of those teams won the NBA Finals that year everyone else would have to pierce either their belly button or nipple and keep it for a year. Long story short, Rory Jackson’s Spurs came out on top and we had the official piercing day on June 29, 2014.

June 29, 2015 quickly approaches, and Ben Curley is anticipating removing his belly ring. This would be a travesty. For a year he was the proud owner of a manly ab-stabbing. He bravely laughed in the face of gender piercing bias. He proudly stalked Southern California beaches, strutting around shirtless like a navally adorned king. He even took his abdominal embellishment show on an international tour, showing the citizens of Japan, Vietnam, and Budapest how truly progressive we Americans are.

Ben fully expects to remove his belly bling on June 29th. I have tried to reason with him. I’ve bargained, begged, and even tried to entice him into another bet. But he selfishly rejects any offers. But we still might be able to save this important midsection monument, which to me symbolizes freedom, progress, and the importance of self expression.

I am hoping to collect at least 200 signatures by June 29th. While he has not agreed that this would change his mind, in fact he has vehemently denied it would have any impact at all, my hope is that when he sees how important this is to all of us he might reconsider. We aren’t asking him to sacrifice or actually even do anything. We are merely asking him to not be a selfish a-hole.

So, let’s join together and make a difference. Sign the petition. Forward it to all your friends and family. We aren’t asking for much. Just another 6 months, or at least til the end of Summer. We can do this, it will be our Torso Trophy.