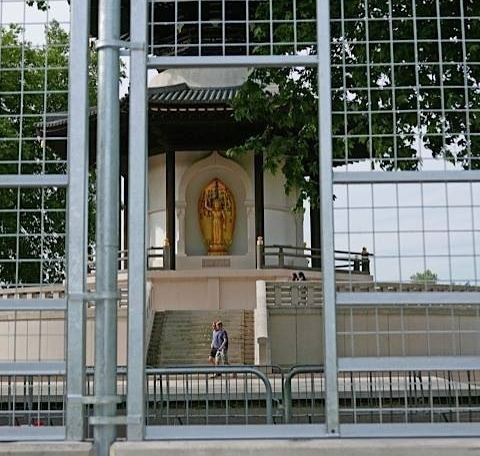 With virtually no local consultation, Wandsworth Council has seen fit to give its consent for Formula E to race 140mph electric cars in Battersea Park and this event took place over the weekend of 27/28 June with a full three weeks disruption to park users, local people and Londoners.

Damage has been done to the park to change it permanently to form a race track and Wandsworth Council has shamefully signed a contract for 5 years. The contract has a break clause after the first year and we want this exercised to stop the event ever taking place again. Our reasons are set out below and please add your support to the growing numbers who view this event as totally inappropriate for a beautiful park environment.

Battersea Park is a very well loved, green, open and landscaped space and forms part of the Battersea Park Conservation area with Grade II* listed status. The park is open to all to enjoy its tranquil surroundings in a car free environment. Swathes of grass and shale surfaced car parking areas have now been removed to make way for permanent and extra tarmac and planting and hedges have also been destroyed to make way for the race track. This new ugly tarmac detracts from what the park should be offering. These lost green areas will never now be replaced unless we insist on full reinstatement. This is a park not a racetrack for the elite few to use for their plaything. If they want this, go to Brands Hatch or Silverstone and hold the event at these purpose built venues where there are the facilities. Alternatively, if the choice is to hold the event in an urban environment use a street circuit.

There can be no justification for this based on green credentials or educational grounds. It is difficult to see how the jet fuel consumed to ship cars around the world and the manufacture of 1,450 concrete blocks totalling over 6,000 tonnes can in any way be described as environmentally friendly. Add to this the diesel from 800+ lorries involved in the three week set up and take down transporting concrete blocks and metal debris fencing from Nottingham and can this really be a proper and sensible advert for fuel cell technology? Also, what example does it set for a younger generation if sacrosanct green park areas are not fully protected and can be permanently ripped up for commercial gain?

To host this event in this beautiful park is wrong on all sorts of levels both in the message it sends and the disruption it has caused. Other commercial events that take place in the park respect what the park is about and keep in the main to a small area without affecting normal park users and excluding their use and enjoyment. This two day event resulted in a public park used by over 4 million people a year having to be shut for four days in the height of Summer. The event appears more driven by a local politician's ego and the desire of Formula E to create a TV spectacle to assist in the sale of worldwide broadcast rights.

The peace and tranquility within the park was broken by helicopters hovering overhead for hours and park users suffered disruption for three weeks where the park became a construction site making it a virtual no go area for many. To us this is wanton vandalism in a conservation area that should not have been allowed and full reinstatement of all lost green areas must now take place without delay.

Please sign this petition to have this event stopped so that it moves to a more suitable venue and save Battersea Park for all to enjoy!