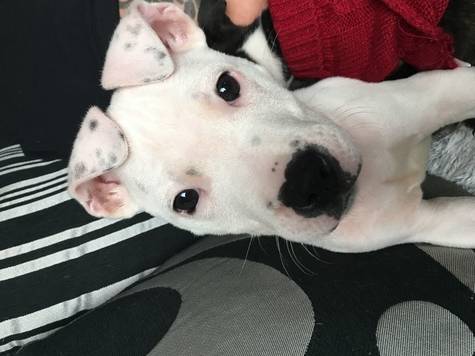 Toby is a soft staffordshire bull terrior never ever has he hurt anyone. One day toby got out of the garden. He ran out into our street to play with a neighbours 4 dogs he had spotted through the fence.... note the neighbour had allowed her 10 year old daughter to go out with the dogs unsupervised by an adult... She was alone with 4 little dogs.... The little girl panicked as toby came towards them he just wanted to play with the 4 little dogs the neighbour... (mother) of the little girl ran up the street and kicked poor toby hard in the face this neighbour has a history on hating staff breeds her 4 dogs are all smaller dog breeds. Toby then went to play with the neighbours 10 year old daughter and accidently scratch the girls leg with his claws jumping about hes a playful boisterous dog hes only 10months old ....Then the neighbour the (mother) of the 10 year old girl and owner of the 4 dogs then rang the police falsly accusing toby of biting her daughter this isnt the first time she has accused a staff breed belonging to someone else on the same street of biting her daughter when all was just a scratch..And openly admitting how much she hates staffordshire bull terriors to the owner and stating IT SHOULD BE PUT TO SLEEP to the owner of the dog. As a result Toby was seized by police and will most likely be put to sleep for doing nothing wrong ..He is now being held intill further notice ..... As at present we have sought solicitors who are doing everything they can to help us fight for toby and fight the case..... Toby is soft natured he was more like a baby we know how frightened he will be right now being in kennels with other dogs with his trusted owners being no~where to be seen He used to cry when he was alone... Hes been with small children since being born he walked off the lead by mine and my partners side all the time and loved attention he would have just wanted to play as he saw everyone as friendly and trusted everyone he is only 10months old and is a pure staff breed. Please sign our petition to save toby