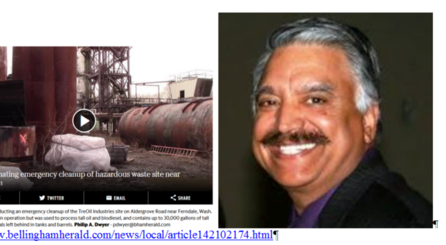 WHEREAS, Treoil Industries Ltd has been identified as a major polluter of our waterways; and

WHEREAS, Satpal Sidhu served as a vice president of operations for Treoil Industries Ltd; and

WHEREAS, in an official campaign statement in 2014 Satpal claimed his service at Treoil as evidence he is a “successful businessman;” and

WHEREAS, the Whatcom County Council is called upon to make many difficult decisions regard environmental and land use issues; and

WHEREAS, the credibility and authority of the council’s decisions will be undermined by Satpal Sidhu’s continuing presence on the council; and

WHEREAS, per the county Charter, the council has the authority to appoint someone to take his place,

NOW, THEREFORE, WE THE UNDERSIGNED do hereby call upon Satpal Sidhu to resign his Whatcom County Council seat effective immediately.