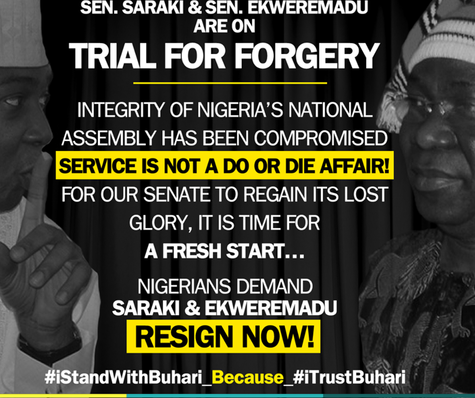 Sen. Bukola Saraki & Sen. Ike Ekweremadu are currently facing trial for forgery, being they have been accused of masterminding the forgery of the Senate Standing Rules to help in fraudulently paving way for their election as Senate President & Deputy Senate President of the Federal Republic of Nigeria

By their alleged actions, they have compromised the moral integrity of the entire National Assembly, as they have dragged the whole body of legislators to shame through acts of deception & selfish impunity

In the interest of restoration of integrity to the law making organ of the Federal Republic of Nigeria both locally & internationally, it is important that the Senate is given a fresh start. This is more important at a time like this when Nigerians have taken on the herculean task of ensuring that the fight against corruption & impunity in public service as championed by President Muhammadu Buhari is fully supported.

We therefore respectfully call on Se. Saraki & Sen Ekweremadu to resign their positions as Senate President & Deputy National Senate President of the Federal Republic of Nigeria, and subsequently face their trial without doing more damage to the National Assembly by further dragging that exalted institution with all the Distinguished Senators & Honourable Members in the mud