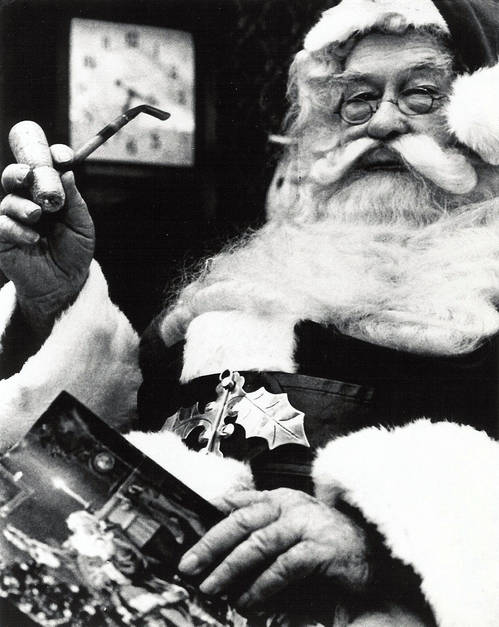 Santa Jim Yellig, Honoring the Man and the Legend

We, the members of the Santa Claus family and keepers of the Christmas Spirit, come together with one voice to request the great state of Indiana bestow its highest civilian honor to a beloved and legendary Santa, Raymond “Jim” Yellig.

Jim was born in Mariah Hill, Indiana. He proudly served his state and his country for seventeen years in the United States Navy, including time spent aboard the U.S.S. New York during World War I. During his service, he discovered he had a gift and a passion that would lead him to an unexpected vocation. Jim was asked to portray Santa Claus for the underprivileged children living where his ship was docked. He was so moved by the children and his ability to bring some happiness to their lives that following the war, he returned to Southern Indiana to pursue his calling as Santa.

Santa Jim served as the famous Santa at Santa Claus Land for nearly forty years, listening to the hopes and dreams of hundreds of thousands of children. Along with his duties as the town Santa, he appeared in parades across the country, and on national television shows and radio programs, bringing attention to a small, Southern Indiana town.

However, Santa Jim’s greatest legacy lies in a tradition he ensured would continue for the enjoyment of future generations. The town of Santa Claus, Indiana, has been helping Santa answer letters from children around the world for over 100 years. Santa Jim was critical in assisting with these letters. In 1935, he recruited community members and groups, including the American Legion, to help respond to the blizzard of letters arriving in town every year. Thanks to Jim’s commitment to the program, Santa’s Elves continue to respond to letters each Christmas season. In 2015, the Elves answered over 22,000 letters. It is a tradition that delivers smiles and happiness to children and brings the community together.

The Sagamore of the Wabash Award is given as a personal tribute to those who have rendered a distinguished service to the state. Santa Jim Yellig embodied the definition of distinguished service. He served his country during a time of war and then continued to serve in a different capacity once he returned home. He brought happiness to millions of children in Indiana, and across the world. His dedicated and selfless portrayal of Santa Claus, and his devotion to spreading the joy of Christmas, all year round, inspired others to follow in his footsteps.

There are thousands of Santas that credit Santa Jim as their inspiration. His legacy as Santa continues to this day in the hearts of these men. Santa Jim Yellig was a humble man. He did not spend his life as Santa for the praise or gratitude. However, the Santa Claus Community would love to see his work recognized and remembered.

And so we ask you, the Governor of Indiana and all the members of the Indiana Congress, to consider Santa Jim Yellig’ s life and legacy. By granting Santa Jim this honor, you will help spread his story to those who are unaware of this great Hoosier who truly embodied the spirit of Christmas.

The Claus Family and supporters from around the world.