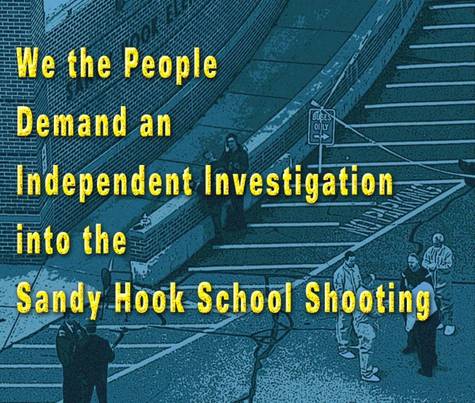 Have you noticed how many people are making videos about the Sandy Hook school shooting? Some of those videos are getting millions of views on YouTube. There are literally thousands of websites on the Internet about Sandy Hook and perhaps millions of threads on message boards and chat forums. Many people have serious doubts about the official story and that's to be expected when there are so many different versions of the story. Some people are calling it a hoax. It's not just the corporate media that is to blame. The police report is causing added confusion with it's conflicting evidence and contradictions in eye witness statements. People are not stupid. They know it's a cover-up.

It's widely reported that the Sandy Hook school shooting was one of the worst school shooting events in history. People want to know what really happened that day. The whole nation was in shock and disbelief. The emotional pain and suffering seemed unbearable. Providing anything less than the truth would be unfair to all the people that were so traumatized by the event. In the aftermath of the shooting, sweeping new laws were passed. The Connecticut state government moved to seal all case files relating to the shooting, in essence, slamming the door shut on any further public scrutiny. Privacy reasons were given for the decision, however, by withholding evidence about the crime they are preventing any legitimate assessment of current and future school safety programs. Don't the children deserve better?

Now that the files are sealed, one can only guess what really happened that day at Sandy Hook. Secrecy promotes mistrust and that's not how a healthy democracy should work. Important information is hidden from public view and the result is human progress suffers. There are many questions being raised.

We the people want to know why not one trauma helicopter was sent to the school even though the total number of injuries was unknown for hours after the shooting. Police had no way of knowing how many kids and teachers were injured. Children can scatter like the wind during a crisis and many were not accounted for until hours later. Barbara Halstead and Sally Cox were nowhere to be seen. Remember, they called 911 for assistance. Were the police even looking for them? When you consider that it took police well over an hour to do a complete search of the school, it follows that the full extent of injuries would not be known for some time.

We the people also want to know why all the doors to the class rooms were not locked as was stated in the official police report. That's of primary importance during a school lock down. All doors must be locked. Why weren't they locked?

Good communication is extremely important during any shooting event and especially during a school shooting so why didn't any of the mobile radios function inside the school that day. This should never happen. Don't they test their radios on a regular basis?

Who made the first 911 call. We may never know the answer because the first call was never made public. The only 911 calls released to the public were the calls made by the acting head custodian for the day Mr, Richard Thorne Jr.. Where are the rest of the calls?

Truth is stranger than fiction and here is a good example. It was nearly four hours before Police discovered Sally Cox and Barbara Halstead hiding in a closet. This in spite of police canine teams searching the school room by room. How is it possible that Cox and Halstead managed to evade police detection in a hotbed of activity for several hours?

This next question is very important. Why was the route to the school along Dickenson drive deliberately blocked? It's because of that, patients had to be transferred by foot and by police cruiser according to witnesses. Precious time was lost. The road was deliberately blocked as can be seen from all available video footage. Why?

Perhaps the most puzzling aspect of this story is the fact the police were told to "wait" according to the transcript. "Wait until you go into the building," one person says from police headquarters near the end of the five-minute shooting spree. "I'm not going to send them in yet". Wait for what? Wait for more casualties to occur? What possible reason would they have for telling the police to wait when young children are being riddled with bullets? Read the News Times article: Sandy Hook 911 tapes reveal cops told to wait. * Fair use doctrine.

Why were Emergence Medical Technicians told to "stand down". Peter Houlahan and other EMTs were told their expertise was not needed inside the school or elsewhere on school grounds. Houlahan said "A person who experiences tragic events will inevitably look back and try to identify that last moment where there was still hope, that instant before all was lost and their life changed forever. For the EMS teams staged in front of Sandy Hook Elementary School on Dec. 14, that moment came when the Newtown EMS captain ordered us to stand down, that there was no one left to help, no one left alive." The aforesaid quoted is from the Daily News article: Sandy Hook EMT and Former Whittier Resident Reflects on Massacre. * Fair use doctrine.

It's very unlikely someone's life would expire immediately unless they received a direct bullet strike to a major organ like the heart or brain. Even when a major artery is damaged it can often take several minutes for someone to bleed out. So why were the Medics told to stand down. It makes no sense.

In summary, the entrance to the school was blocked off, the police were told to wait and EMT's were told to stand down. In every case precious time was lost. It's possible, more lives could have been saved. Add to this the fact that some of the classroom doors weren't locked, radios didn't work and most important of all, Life Star helicopters never came. It's difficult for the average citizen to accept the events as reported that tragic day in December 2012, however, it's extremely important that we the people find out what really happened so tragic events, like the shooting at Sandy Hook, never happen again. Let truth and justice prevail.