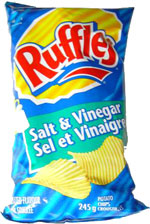 Salt and Vinegar Ruffles were discontinued in 2008 against all logic and reason. There is not another chip ON THE PLANET that resembles what Salt and Vinegar Ruffles were capable of achieving.
The taste buds rejoiced like a New Year's celebration!
The tongue felt fully alive with pleasure and pain all at once.
And paper cuts were intensified without mercy.
Frito-Lay says market research is to blame - Show us!
Frito-Lay says they sell salt and vinegar through other brands - Not the same!
Frito-Lay has an opportunity like no other - Ripple it!
Have you forgotten how Salt and Vinegar Ruffles took your mouth by storm?
Do you stand in the chip aisle seeking a viable alternative, but fail?
Then sign this petition and be heard!
Put pressure on Ruffles and Fritolay. Demand answers on social media and their corporate websites. Our tongues have rested and recovered for six long years. We need that feeling back! #FreeSV