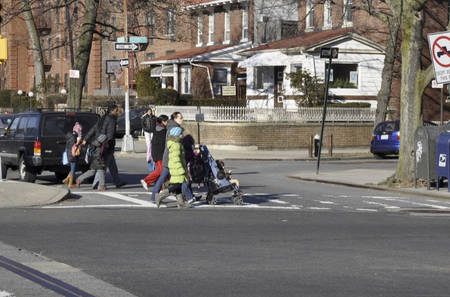 A safer intersection for Kensington-Windsor Terrace!

To the attention of:

We, the undersigned parents/guardians of PS 130 and MS 839 as well as other community members in Kensington/Windsor Terrace, Brooklyn, are deeply concerned about the intersection of the Ocean Parkway Eastside service road and Caton Avenue. This is a busy pedestrian route with numerous people traveling to and from the PS 130 Lower School; the PS 130 Upper School and MS 839 Parkside Educational Complex; and the Ft. Hamilton F/G train station. It currently has no School Crossing Guard or signage indicating that it is a school zone. It is not a safe intersection.

The North side of this intersection is particularly dangerous, with many drivers turning onto the Ocean Parkway service road from Caton Avenue, often without regard for pedestrians. Already since the beginning of the school year, we’ve had numerous complaints from school and community members about drivers endangering both children and adults crossing with the light at this intersection.

Our community suffered the heartbreaking loss of the much beloved PS 130 graduate, Mohammad "Naim" Uddin, in November 2014, when he was hit by a driver in the crosswalk of E. 7th Street and Caton Avenue, one block from this intersection. We are asking for action to avoid another injury or even death.