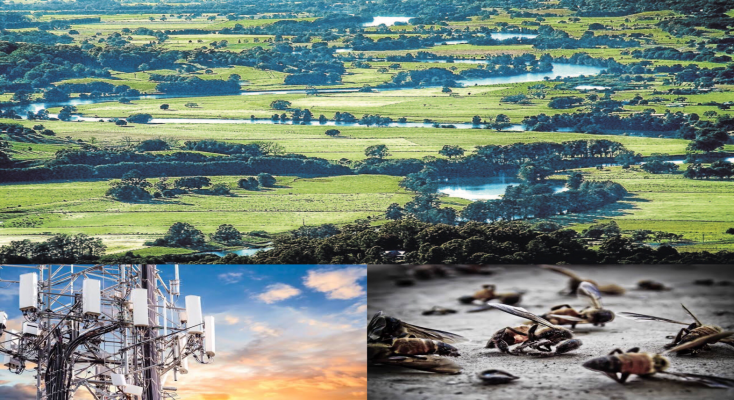 430 people have signed this petition. Add your name now!

I/We object to all 5G upgrades in the Bellingen shire and call for a moratorium on the roll-out of 5G across the entire region, for the following reasons:

1. The 5G roll out is a breach of the mandatory obligation to apply the precautionary principle when deploying mobile phone radio communications infrastructure (Clause 4 Mobile Phone Base Station Deployment Code).

2. There are thousands of peer-reviewed scientific studies evidencing harm from radio frequency electromagnetic radiation (RF EMR) well below the standards set by ARPANSA.

3. The ARPANSA Standard has been strongly criticised by independent scientists worldwide as unscientific and inadequate for the protection of human safety. Authorities in other countries have adopted standards ten to 100 times more rigorous than the ARPANSA Standard.

4. More than 250 scientists have signed the International EMF Scientist Appeal, which calls for stronger exposure limits. These scientists have published more than 2000 peer-reviewed papers on EMF in professional journals and arguably constitute the majority of experts on the effects of non-ionising radiation.

5. No long-term prospective studies have been completed proving the safety of RF EMR levels under the ARPANSA Standard for children.

6. In 2011, the International Agency on Research on Cancer (IARC) listed non-ionising radio frequency radiation from cell phones and other wireless devices in Group 2B: Possibly carcinogenic to humans.

8. The views of ICNIRP (on whose guidelines the ARPANSA Standard is based) and ARPANSA are not in line with the opinions of the larger, independent scientific community that has published peer-reviewed research on the biological effects of RF EMR. ICNIRP is not independent of industry and has had numerous conflicts of interest identified over the years.

10. There are no independent long-term studies demonstrating the safety of prolonged exposure to the millimeter frequencies (from 26 GHz up to 86+ GHz) intended to be used for 5G in the future.

12. Internationally, hundreds of scientists and medical doctors have called for a moratorium on the roll-out of 5G until potential hazards for human health and the environment have been fully evaluated (e.g. International EMF Scientist Appeal and the 5G Appeal). Such moratoria have been implemented overseas (e.g. in Brussels, Geneva and Glastonbury).

13. ARPANSA has acknowledged that further research on the frequencies to be used with 5G is needed:
Both the RSC (2014) and SCENIHR (2015) reviews identified that the dosimetry in the 6 GHz to 300 GHz range is still developing and further research is required to examine the effects of exposure to new and emerging technologies. The SCENIHR review in particular mentioned that “considering the expected increase in use of THz technologies, more research focusing on the effects on skin (long-term, low-level exposure) and cornea (high intensity, short-term exposure) is recommended.

14. 5G millimeter waves involve vastly more pulsation than the 3G and 4G microwaves. There is substantial scientific evidence that pulsed EMFs are usually much more biologically active than non-pulsed (or continuous wave) EMFs.

15. Upgrading the base station to 5G would add a layer of radiation exposure, on top of the already existing 3G and 4G infrastructure. EME levels would continue to rise cumulatively as further carriers upgrade to 5G by installing more antennas. They would rise even further in the second phase of 5G with the use of mm Waves requiring the dense deployment of small cells.

16. Multiple peer-reviewed studies have shown an increase in ill health effects in populations living near mobile phone base stations, ranging from neurological damage to breast and brain cancers.

17. A recent analysis by Vertiv found that the move to 5G would likely increase total network energy consumption by 150 to 170 per cent by 2026.18. Professor Martin Pall (Emeritus of Biochemistry and Basic Medical Sciences, Washington State University) has warned that EMF exposures make plants much more flammable, and may therefore cause and contribute to bushfires. With Australia facing record bush fire threat levels, there is an urgent need for more research into the bushfire risk 5G poses to rural (and even urban) Australia.

19. Many scientists have warned that flora and fauna – trees, birds, wildlife and insects are all under threat of harm (or worse) from microwave radiation from 5G. Widespread harm to flora and fauna (especially bees) would have dire repercussions for us all.

20. There are growing privacy and security concerns about the Internet of Things, with increasing invasions of smart home devices by hackers.

21. Mobile phone base stations, in general, cause a significant loss of scenic amenity to residents.

22. Based upon historical trends, mobile phone base stations adversely affect the value and salability of nearby properties.