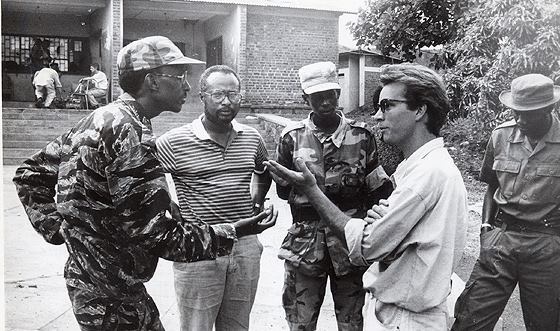 Rwandan Victims of the RPF- Inkotanyi Massacre are Proud of BBC Trust for the "Rwanda's Untold Story" Documentary. It Speaks for Millions of Rwandans.

On behalf of the Rwandan victims of the RPF massacre, we are writing to express our deepest gratitude to the BBC for the courage and integrity of those who produced and broadcast the BBC This World Documentary, “Rwanda: The Untold Story.” We are victims and friends of victims who have been waiting a long time for an outlet with the credibility and influence of the BBC to tell this much truth about what really happened in Rwanda.

The Rwandans among us have been extraordinarily fortunate to live to this day and sit together in our living rooms watching this documentary that dares to tell more truth about Rwanda than any outlet so esteemed and influential has dared tell in the last 20 years. We were all in tears as the documentary touched our story as a people and told our individual stories without the bias, compromise, and/or prejudice that characterized previous productions on Rwanda’s tragic recent past. Once again we wish we had a better way to say thank you, but human language is too limited to express how grateful we are. With no cloud of any doubt in our minds, 80% of all Rwandans would say, “Thank you very much BBC,” if they were able to see this documentary. Unfortunately, many of those in Rwanda will not be able to so long as the Kagame regime is in power.

In 1991, twenty of us were between 5 and 11 years old. We lived in Byumba, in northwestern Rwanda where we witnessed the RPF insurgency at first hand. We saw our parents, relatives, uncles, aunts, and playmates being butchered in broad daylight. Those who survived fled and crossed over into eastern DR Congo.

Our woes did not end there. They continued every year as we grew older. In October, 1996, the Rwandan RPF soldiers invaded the camps and started shooting and killing indiscriminately. The majority of our relatives died in these massacres and those who survived fled into the Ituri Equatorial jungle. The RPF soldiers followed us shooting and killing any living creature that they found on their way. We saw our mothers being hacked to death as we were hiding in a granary in a region called Masisi. Even if you go there today and ask the people of Kibabi they will tell you about how the RPF massacred Rwandan refugees’ there on 17 November 1996. Seventeen years on we can still see our mothers bleeding to death.

Those who survived the Masisi massacres continued all the way to Walikale, Amisi, and temporary settled in Tingitingi, in DR Congo’s Maniema Province. We vividly remember what happened there on December 19, 1996. Christmas week found us in Tingitingi refugee camp scavenging for anything to eat. At least three quarters of the refugees who left Masisi region, heading onward into the unknown west, didn’t make it to Kisangani. The majority of them were women and children, families with children, sick and elderly people, or those women who were expecting were captured by RPF soldiers who cut out their unborn children with knives. That is how my uncle’s wife Jeanine Uwamahoro died . After doing that to Jeanine, the soldiers asked her husband Simbikangwa to drink her blood if they wanted him to be allowed to go on and when he refused, they gorged out both of his eyes and told him to proceed to Tingitingi. He died at Amisi refugee camp due to infection of his wounds.

Some of us were able to leave Tingitingi on February 22, 1997. We had no known destination, but we continued on into the Congolese jungle, knowing we had little chance of getting out alive. Five kilometres beyond the Tingitingi refugee camp, we were ambushed by RPF soldiers who started shooting at us as we tried to cross River Lubutu. The Lubutu Bridge collapsed into the river as thousands of refugees crowded on trying to escape the RPF soldiers’ bullets.. Even as it sunk into the river with all of those Rwandan refugees on it, more and more massed at the riverbank. RPF and Ugandan soldiers continued shooting at us, until bodies piled up and became a new bridge of human corpses. Some of us survived to write to you this letter only because the bodies of our relatives, friends, neighbors, and schoolmates made a new bridge on River Lubutu. We crossed over as thousands of drowining souls called out for help through the deafening sounds of machine-gun fire. Those of us writing you this letter survived.

Some of us continued all the way to Kisangani, Ubundu, Ikella, Mbandaka and crossed over to Lukolela in the Republic of Congo. Thousands of Rwandans were killed by RPF in all these places. We were there and we witnessed it. Those of us who survived struggled on from Lukolela to Brazzaville and then to Cameroon. From Cameroon some of us managed to get to the safer countries where we now dare to write you this letter to express our gratitude.

Those who are protesting your work have benefited from their lies for 20 years and now fear losing all the victims’ license that those lies have afforded them. “Rwanda: The Untold Story” rightly identified that undeserved license as “the genocide credit,” which comes from making the world believe that Rwanda’s story was a simple, sudden tale of evil Hutus massacring innocent Tutsis. As Professor Allan Stam stated, “If a million people died in Rwanda, and that is certainly possible, there is no way that the majority of them were Tutsi . . . because there weren’t enough Tutsi in the country.”

Those who wrote you a protest calling themselves “academics, scientists, and journalists,” have written books promoting the lie that the majority of those who died were Tutsi and the BBC documentary therefore cuts right through their academic, scientific, or journalistic credibility. Their protest should not be heeded at the expense of the millions of Rwandans who support this documentary.

The strong passions that Rwanda’s Untold Story has provoked reveal the repressed need for dialogue and debate in contemporary Rwandan society, which must be allowed allowed if Rwandans are ever to achieve true reconciliation. Although Rwanda’s dictator, “President” Paul Kagame and Western professionals who support him are enraged by your groundbreaking documentary, the majority of Rwandans are grateful for this contribution to the truth that a safe and sustainable Rwandan future must be built on.

Rwandans who have not escaped into exile live in constant fear and cannot speak out, for fear that their bodies may soon be found floating in Lake Rweru, like the 40 who floated down the Akagera River into Burundi last month. Rwandans in Rwanda know they must keep it to themselves to live another day. Those of us who came together to write this letter hope that Kagame will not send a hit squad to shoot us, hang us, or smash our heads in, but we are writing nevertheless.

Once again thank you for standing with the majority of Rwandans, both Hutu and Tutsi, and with their friends around the world, to tell the whole world what really happened in Rwanda.