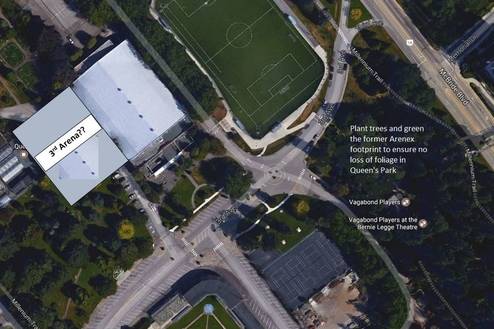 UPDATE: July 31, 2019: I recently reached out to Councillor Jaimie McEvoy who indicates that there has been no progress made to move this project forward. He has expressed an interest in meeting with me to discuss further.

UPDATE November 30, 2017: I formally presented this petition to the City of New Westminster Parks and Recreation Committee yesterday. I asked City Council to give full consideration to putting the issue of a new arena on the ballot during the 2018 civic election. Representatives from the NW Minor Hockey & Minor Lacrosse Associations joined me at the meeting. Please make sure to continue spreading the word about the petition and our efforts!

The recent destruction of the Queen's Park Arenex in a winter snowstorm last year offers the City of New Westminster a wonderful opportunity to rethink our community sports facilities.

A city the size of New Westminster should have at least 3 arenas in order to support our lacrosse, hockey and other community activities. Cities that are much smaller than New Westminster have more than 2 arenas to meet the needs of their local sports community.

Q. Why does New Westminster need a 3rd arena?

A. This would allow us to host more frequent and larger sport tournaments which support local sport tourism activities and the local economy. It would also greatly increase the opportunity for us to increase the flexibility of practice and game times which are often conflicting due to a lack of arena time.

Q. Where should it be built?

A. It can easily be built next to the Queen's Park Arena in order to optimize staff and equipment.

Q. Will this take away from green space in Queen's Park?

A. No. Not if the existing site of the former Arenex building is converted to green space.

Q. How will it be funded?

A. It can be a joint partnership between the City, Province and Federal government. Local sports teams can also join in a capital fundraising campaign to support this effort.

Q. Why are you doing a petition?

A. The petition will help to determine how much community support there is within New Westminster for this initiative. It will also help to encourage our political leaders to take action.

Q. Why not build next to Moody Arena instead?

A. It is too late to build a new arena there now that the secondary school is moving forward with its plan to open in 2019.

Q. Where will the Arenex move if its former location is converted to park space?

A. Some of the programs could be accommodated in a number of the unused gymnasiums throughout the city - as is currently the case. There may also be some space made available as part of the Canada Games Pool renewal.

If you would like to see a third arena built in New Westminster, please sign the petition now! It will be formally presented to New Westminster City Council.

To learn more visit www.danielfontaine.ca or read these articles: