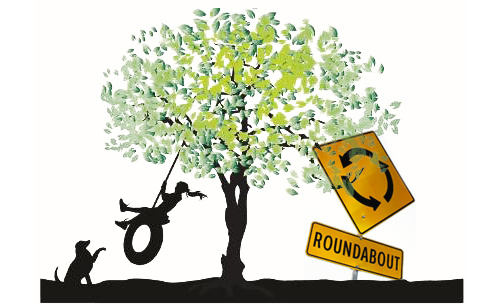 We, the citizens of Conception Bay South, petition the town to conduct a feasibility study to convert the Minerals Road, Rideouts Road, CBS Highway intersection (colloquially known as Kitty Ades Turn) to a roundabout-type intersection.

This intersection is of particular concern due to its unusual complexity. Community forums are riddled with complaints of users not following the rules, utilizing turning lanes as straight-throughs, or otherwise simply confused. As uncovered through an access to information request, 6 accidents have been reported in this intersection over the past 10 years - 4 of which the persons(s) involved suffered injuries significant enough to warrant report.

Two common occurrences are: 1) traffic eastbound on route 60 utilizing the centre lane as a straight through to Minerals Road where, in fact it, is a mandatory left turn, and 2) traffic traveling westbound from Minerals Road who wish to enter the shopping centre must cross two lanes of traffic in a short distance after leaving the intersection.

The proposed solution takes advantage of the large area this intersection already possess. The installation of a roundabout would require no reclaim of lands from citizens. Amended is a mock-up of the suggested intersection. This attempt accounts for the two four lane highways and two smaller three- lane roads and routes traffic in similar to the current intersections capacity. Its outer diameter is approximately 50 meters. For perspective, the airport roundabout (interacting World Parkway and Navigator Ave) is 45 meters, and the Paradise roundabout (intersecting Karwood Drive and Kenmount road) is 60 meters.

Please see the attached petition consisting of ___ signatures from the citizens of CBS, lobbying for this study.