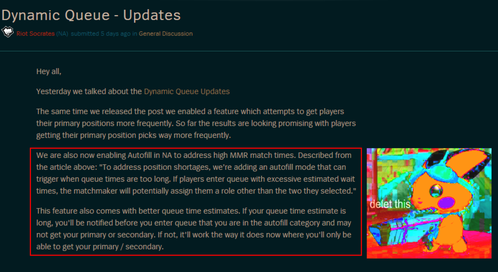 Ever since this feature was implimented, many players have experienced LP loss, automatically lost games before the game even starts, increased pre-game and in-game toxicity, in-game ragequitting, players being placed in roles they've never played in before in Ranked, and the most ironic part about all of this, the original issue it was supposed to tackle is still rampant, queue timers are still as bad as ever, except now players are finding that up to 50 minutes of their time is being wasted by numerous fundamentally flawed features that have negatively affected Ranked games very harshly, resulting in wasted time and automatic losses.

In higher ELO's (and even the occasional low ELO games), players have to deal with one more very annoying and prominent issue. Mismatchmaking of the ELO system.
Many high ELO and pro players have experienced issues where either their team or the enemy team is either extremely higher or lower ranked than what they are, resulting in a severely unfair match being played.

We, the players ask Riot Games to correct the issues that they have implimented into the game, starting by disabling Autofill immediately, a prominent issue that is severely impacting the game, then moving onto other flawed features that are rampant in the Ranked system immediately, Live Servers are not your social experiment, we just want to play the game without major changes to the ranking system midway throughout the year..