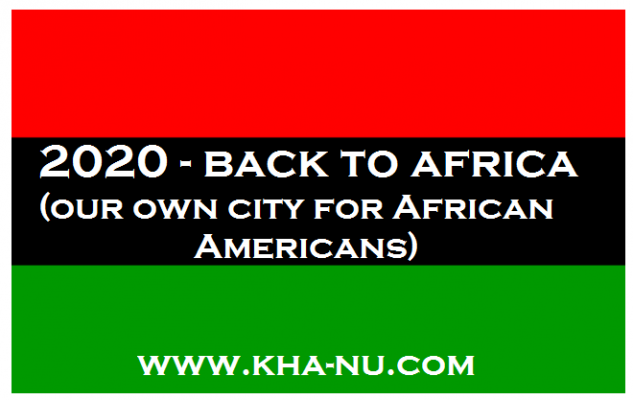 Africans-American Resettlement to Africa - Petition to the President of the U.S.

A PETITION TO THE PRESIDENT OF THE UNITED STATES UNDER THE AUSPICES OF A UNITED NATIONS RESOLUTION "TO RETURN AND RESETTLE DESCENDANTS OF ENSLAVED AFRICANS" - IN THE U.S. (DEAUS) TO AFRICA..

CUT AND PASTE LINK BELOW

This Petition is own the behalf of a community of Descendants of Enslaved Africans in the United States (DEAUS) to "Return and Resettlement" under the auspices of a United Nations resolution. As a people, DEAUS have a collective right to return and the right to self-determination under the International Covenant on Civil and Political Rights (“ICCPR”).

I offer the following:

Recalling “The Durban Declaration and Programme of Action (DDPA), Section IV. Provision of effective remedies, recourse, redress, and other measures at the national, regional and international levels.

Paragraph 158.(i) Facilitation of welcomed return and resettlement of the descendants of enslaved Africans;

Recalling further Human Rights Council resolution 56/266 of 27 March 2002, in which it endorsed the DDPA as constituting a solid foundation for further action and initiatives towards the total elimination of the scourge of racism.

· that Article 13 (2) of the United Nations' Universal Declaration of Human Rights is as follows:

Everyone has the right to leave any country, including his own, and to return to his country.

· that Article 12 (4) of the International Covenant on Civil and Political Rights incorporates this right into treaty law:

No one shall be arbitrarily deprived of the right to enter his own country.

· that Article VI. of the United States Constitution is a follows:

…and all Treaties (ICCPR) made, or which shall be made, under the Authority of the United States, shall be the supreme Law of the Land; and the Judges in every State shall be bound thereby, anything in the Constitution or Laws of any State to the Contrary notwithstanding.

That Preliminary Emancipation Proclamation is as follows:

· ….or thereafter may voluntarily adopt, immediate, or gradual abolishment of slavery within their respective limits; and that the effort to colonize persons of African descent, with their consent, upon this continent, or elsewhere, with the previously obtained consent of the Governments existing there, will be continued.

As the United States highest Governmental official, your good office is needed to ensure that human rights process is comprehensive, strong and consistent with resolutions and decisions adopted by Congress and the United States Constitution.

As President of the United States, please issue an executive order to appoint a nonpartisan commission to investigate and initiate provisions for the "return and resettlement" IAW international law and DDPA, of DEAUS to Africa, beyond the limits of the United States, by the provisions of an executive order, as may be willing to emigrate. The commission shall inquire into the expediency to support the acquisition of an annex of the State and the State of Kha-Nu to resettle DEAUS who are now willing to settle in such territory. Congressional appropriation for an initial $2 BILLION to be use by your office for the restitution, compensation and repatriation of DEAUS.

I/we the undersigned call on the United States Government to investigate the resolution to resettle DEAUS in Africa.