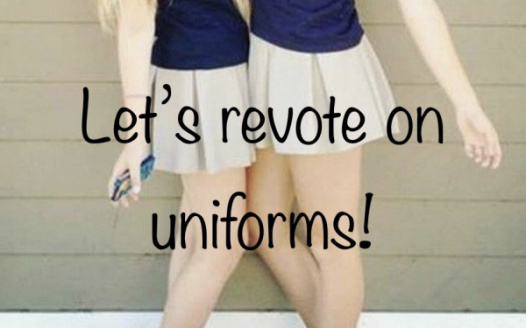 Is it time for a revote? I say YES!
1. Are school uniforms really doing what they were set out to do? School uniforms do not seperate the “have” and the “have nots” taking only two months or less for children to identify among their peers.

3. Are our students feeling equal?
No child thinks or feels the same or has the same home life as a fellow student and making them wear the same clothing does not change there individuality it only suppresses it.

4. Are the students academically achieving? Studies show that uniforms have no effects on attendance, grades, or test scores from students ranging from 2nd grade to 10th grade. Children are still preforming academically the same as non uniform students.

5. Has it eliminated school dress code issues? I say not, how many students are sent to the office for no belt, or the wrong color socks. Studies show that schools with uniforms have more dress code issues than non uniform schools creating more problems.

School uniforms do not make improvements to the children’s education or self esteem.
What they are accomplishing is the powerful marketing tatics of large companies they promote school uniforms so that parents not only buy uniforms they buy non uniform clothing for non school days. Resulting in a multi million dollar sales in both departments.

My goal in this petition is to give the community a revisit on this matter. Are school uniforms really working? Are they worth it? Should it be continued?