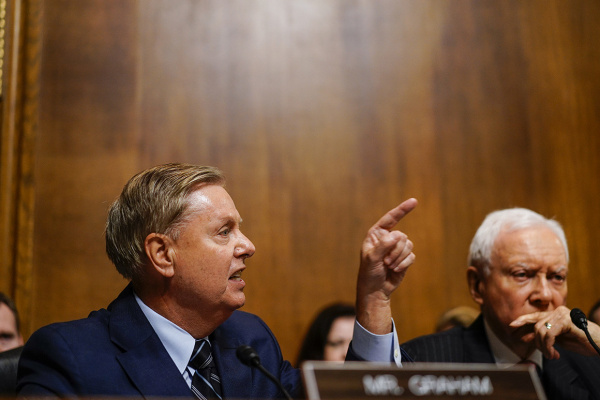 In 2004 during the 100th year celebration of the Pi Kappa Phi fraternity, Senator Lindsey Graham (South Carolina) was invited to become an alumni initiate. This was particularly significant as the 100 year celebration was held at our founding chapter at the College of Charleston.

Becoming an initiated brother of Pi Kappa Phi Fraternity is a great honor and privilege. Due in large part to his status as a public figure and elected official, Senator Graham’s alumni initiation and brotherhood privilege is unique.

In a recent public exchange, Senator Graham has failed to live the highest ideals of Pi Kappa Phi brotherhood and Christian manhood in his public duty as elected official and as a full-fledged brother of the Fraternity, both during his outburst discrediting sexual assault victims inside and outside of the Supreme Court Justice nomination hearing.

Senator Graham has failed to uphold the expectations and pledged oaths he took as an alumni initiate. With this petition, we implore Senator Graham to thoughtfully and genuinely apologize to Ms. Robyn Swirling for his callous response to her sexual assault. Failure to do so should lead to revocation of his alumni initiate privilege.

As one of the most recognizable and oft-cited Senators on our country's political landscape, it is important that such a brother serve as a role model regarding civil discourse, leadership, treatment of sexual assault victims and what it means to be a public servant. This is particularly true considering Pi Kappa Phi's official "Where We Stand on Sexual Misconduct" statement.

Thanks to his alumni initiation in 2004, Senator Graham enjoys numerous public declarations and cited listings of his Pi Kappa Phi affiliation on official Pi Kappa Phi publications, including associate member education materials. Should he fail to properly apologize to Ms. Swirling and pledge to honorably address claims of sexual assault in all future actions, this petition calls on Pi Kappa Phi to officially revoke his alumni initiate status and notable alumni mentions.

What is an Alumnus Initiate?

An Alumnus initiate of Pi Kappa Phi is a “full-fledged” brother of the Fraternity, but is a member who was initiated after he left school. He is accorded all the respect and responsibility due any other member of Pi Kappa Phi.

What Are The Requirements to be Initiated as an Alumnus?

“This Fraternity shall be composed of male persons of good moral character; believers in God; the highest ideals of Christian manhood; and the principles of good citizenship; who shall be regularly initiated according to the laws of the Fraternity…”

Do you believe that we should uphold the values of our fraternity and maintain that our alumni initiates act according to our highest ideals of Christian manhood? Sign

this petition today and share with your fellow Pi Kappa Phi brothers.