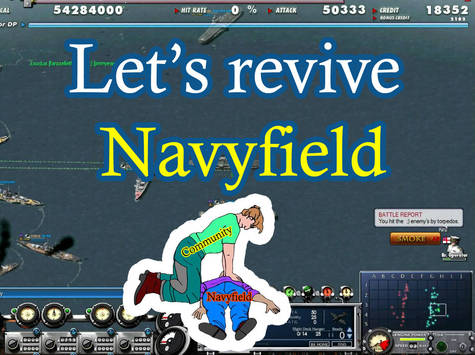 Navyfield is a game where thousands of players were playing and having fun. We had good memories in great battles BB rooms fleet leagues HA, etc. The most of us joined at least one time a fleet and had friends in radioman, We were having fun to talk for long hours in clan area about battles and recruiting new members . We met new people and we shared awesome moments. But since 3 years, Navyfield has started to lose players especially when SD internet launched navyfield 2 which many users didn’t like and by consequence most of them stopped playing. Also SD internet stopped supporting navyfield 1 ,so instead of having many servers they kept only one. Also many players were young and now they are adult, so they can now afford premium items which is also an interesting thing for SD internet .We aim to have a win-win relation in which players are having fun and the company is awarded for its work.

First of all we made a petition to prove to SD internet that they need to be interested again on navyfield 1 and secondly we aim to create a strong community to revive the old times and to protect the game from future issues.

We have already a list of ameliorations we think can make changes, the main ones are :

So, we are asking the support of all players new or old to get back the game we love always. Also, we ask SD internet to collaborate with us in a vision of having a win-win relation.

Join us on the official navyfield fan page