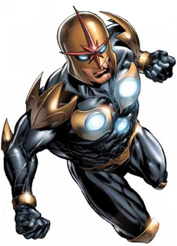 460 people have signed this petition. Add your name now!

We, the undersigned, request that Marvel Comics return Richard Rider to the Marvel Universe as Nova Prime.

This is not a request to undermine any efforts related to Sam Alexander as Nova. We believe the Marvel Universe is large enough to support more than one character related to the Nova legacy.

Richard Rider was the original Man Called Nova and has almost 40 years of history with readers. The Annihilation epic and the post-event adventures of Richard Rider as Nova Prime elevated the character to a new level of popularity and stature.

Despite a lack of an ongoing title over the last few years, Rich Rider remains a fan favorite. The sales of the recent video games featuring Nova Prime and the Marvel Legends Nova figure support this.

We believe Richard Rider as Nova Prime could garner high sales in a mini-series or ongoing title with a proper creative team. All we are seeking is the opportunity be given to the character.

Thank you for your time and consideration of this petition.