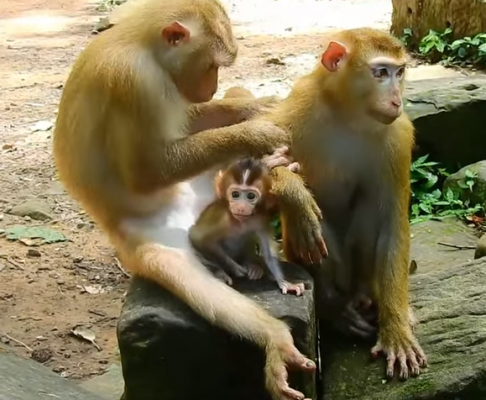 Return LIBBY and BABY RAINBOW back to their troop

We would like to ask for your help in the following case.

A few days ago, at the Ancor Temple, the WPCO removed from the ‘’sovanna troop’’ a group of young ex-pet monkeys abandoned by their owners a young pig-tailed monkey named LIBBY and her adopted daughter RAINBOW from the nearby park/forest against advice of specialists and primatologists to not proceed with the plan.

This happened after WPCO receiving a donation of 1000 American dollars to kidnap a wild animal acting like mercenaries or mafia-gangsters for the money of the contract on a victim’s head. Under Internatonal Laws this action is considered poaching and wild animal trafficking because LIBBY is a Northern Pig-Tailed Macaque and this species has just been recently reassessed and appearing on the International Union for Conservation of Nature's Red List of Threatened Species (IUCN, 2020).

Everything was publically posted on videos taken by Video Operators who follow the way this new troop is evolving. Do not forget they are abandoned, ex-pets, semi-domesticated and lacking survival skills that their mother, relatives and troop would teach them. Their only ‘’elder’’ is ASHLEY an older female monkey who ‘adopts’ and teaches them the monkey life. So, this troop is rather unique and worth following and happening under your jurisdiction and protection. We strongly believe they are worth studying by VOs (who should follow some regulations but are very useful because they follow every angle of the troop)

For some reason ROSE attacked LIBBY and both babies got swapped around. Although that could be catastrophic for both od the babies lives both monkey mothers cared for their ‘adopted’ infants and built a bond.

We believed Nature decided for this extra ordinary event to happen till TERESA ROYCE, a lady from the USA paid $1000 to swap the babies back... Under video evidence LIBBY and RAINBOW were captured and taken away in one filthy not for the appropriate for the case cage while ROSE and BRADY remained with the Amber troop.

ROSE was left at liberty as she couldn't simply be caught. The NGO (WPCO) came back a day or two later, a baby-swap which ended in disaster was attempted, both infants were kidnapped by different other monkeys who didn't care about them and left them almost dehydrated. RAINBOW was taken from one of the kidnapping monkeys (BUTTONS) by a very courageous VO, rescued and taken back to LIBBY at the facility the NGO claims to have and both the animals are being held captive.

We, the viewers, people who love the wild life that we don’t have in our countries and consider yours blessed, asked for updates and information about LIBBY and her daughter RAINBOW and when she will be released. WPCO announced more monkey-kidnaps! and that LIBBY after she recovers (she has never been sick!), she will be relocated to a place that only WPCO knows and it is secret. Do they have the right? We believe not because Cambodia Agriculture Forest Administration and Fisheries and Wildlife Alliance visited their facilities and hopefully … (forgive us but we have to censor our comments and thoughts because they are not very positive for this scamming NGO mafia!). We believe immediate action is required against them because they pretend they represent Cambodian authorities and the real authorities would not be happy with the thoughts people for other countries have for theirs. We are afraid they wanted to sell to the higher bidder the two monkeys and say they have them in a secret location.

We believe LIBBY and RAINBOW are unique and one of their kind.

LIBBY is an ex-pet, abandoned with non survival skills, she survived and she is the first mother in this newly formed strange troop. She is learning and working out of instinct how to be a mother and she is doing fine considering her young age as well. LIBBY should be set free in plain sight and followed by specialists to see her progress as a mother. LIBBY will be the example for the other younger ‘’sisters’’ who are already expecting from what we believe and will be assisting them with her experience.

For this we are asking you to set LIBBY and RAINBOW free back in their ‘’community’’, in their troop, in their environment and not a place that they will have zero chances to survive.

Thank you for reading me

PLEASE NO DONATIONS! NO MONEY INVOLVING THIS PETITION!

AND WE WON! AGAINST ALL ODDS AND THE WAR AGAINST US FROM THE NGO AND SOME OF THE VOs, LIBBY AND RAINBOW ARE BACK TO THE PARK.

THANK YOU PEOPLE, YOU WHO SIGNED THE PETITION AND BELIEVED IN THE CAUSE. TOGETHER WE HELPED THE HELPLESS AND VOICED THE VOICELESS!