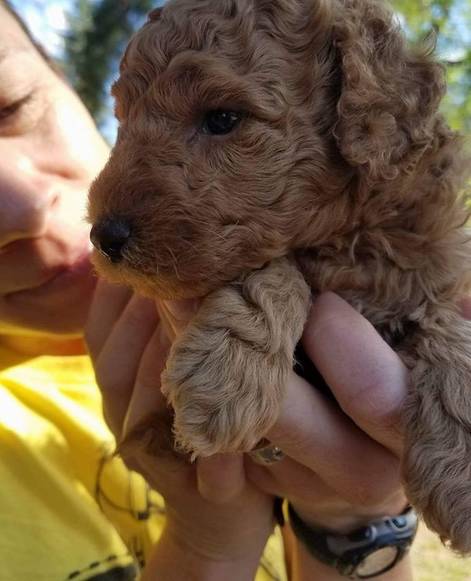 IF YOU VALUE FREEDOM FROM TYRANNY, PLEASE PROTEST THIS!

These animals were stolen by the Lincoln County Sheriff's Office and the HSUS. Including the 4 week old baby AKC poodle puppy Adonai Stay Humble N Kind pictured on this petition. The only puppies the day of the Raid August 2, 2016, besides *Humble* were the older Donated and Partly Paid for Service Pups *Hudson, Moose, and Rusty* waiting for their travel plans.

All the HUMAN SOCIETY of the UNITED STATES publicity Photos are of dogs that are not even hers. This woman would never starve or abuse an animal! She is kind and generous. She'd give you the shirt off her back! She loves children and she has poured her life into breeding the best service dogs that can be bred.

In this case, you have a woman who has spent countless thousands of dollars to get the best breeding stock that she can from around the world in order to produce puppies that are sound in body, happy and even in temperament, and free of genetic problems which would shorten their lives and break their owners' hearts. They are highly intelligent and retain the retrieving drive which they were originally bred for. They are the perfect size for a child who needs a best friend to help them cope through incredible difficulties due to illness.

More yet, she gives a lifetime guarantee and *always* makes herself available to support the families that buy her dogs for as long as they own the dog. Not every breeder in the world does that?!

This breeder does DNA Health Tests on her poodles and raises a few litters spread out over 3 or 4 years, and then finds good homes for them to grow old in. If any home for puppy, mature dog, or service dog is not a good fit, she requires that they come back to her so they don't end up in a shelter.

What happened in Libby was theft. Plain and simple. If you hunt for news clips, you'll hear the gal at the shelter say with her own lips that they'll have no problem finding the dogs homes because they're "very nice dogs". Not cowering. Not aggressive. Not unhealthy. No big, weeping sores. No mange. No missing eyeballs.

A couple of them were scheduled for grooming. Are they going to "rescue" every dog in the US that needs a haircut?

Cathie's dogs were seized on August 2, by the Humane Society of the United States (HSUS) and local Sheriff.

Fast forward days later, she spent 33 days in local Jail, she was released with a hearing pending trial on Nov. 28th, 2016 to decide whether the charges will be upheld, which was at that time delayed until December 12th and again delayed... Meanwhile the dogs are still being held by local Pounds until the jury decision and sentencing are reached.

HSUS seeks to pass onerous, over reaching animal legislation in Montana - they have tried and failed several times - and this raid was planned in advance for this purpose. Look at SB 203, HB 570, HB 582. Cathie wrote opposing these Bills and she even traveled to Helena and spoke in person before the Business and Labor Committee opposing that final Bill HB 582.

HSUS has targeted Montana in an effort to make the public think of Montana as a state that does not care about animals.

Actually enforcing current laws does not make the desired headlines and does not line their pockets with donations based on deception.

Cathie has passed inspections for years and was told by County officials on June 30th, 2017 in the presence of the County Sheriff that she had a renewed license, just one month before her dogs were seized.

No one has been allowed to see her dogs since they were removed, and they have been separated and placed in several Pounds (they call them Shelters)

No one has seen them and no one knows if they are being cared for properly.

This is simply the result of targeting one of largest in number poodle breeders in Montana, ignoring that Cathie Warren--Odegaard , does not breed for the pet trade, but for the Service and Therapy Community, and also ignoring that the number of her poodles reflect that Cathie was finalizing her plans for a Service Poodle Training School, with it's own breeding program; HSUS goals are to change the laws of Montana and for fund raising, throwing this GOOD Breeder under the bus in their process.

Please continue to pray for all the truth to be revealed, of the Colluding, of the Conspiring, those actions are Criminal !!!

This petition will be certified mailed to Montana HD1 Rebublican Rep. Steve Gunderson and to the Montana House of Represenstatives 65th Legislatures-Regular Session Committee On Business and Labor Chairman also a Republican Rep. Mark Noland.

This petition will be also shared to the Attorney General of Montana,Tim Fox.