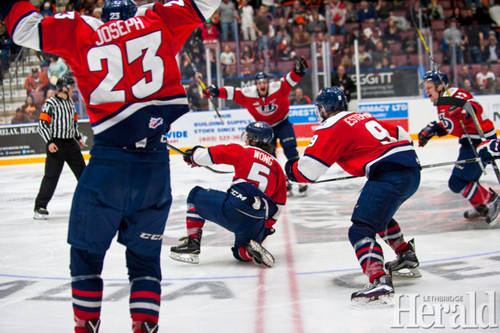 Over the past 30 years, the Lethbridge Hurricanes have had a lot of incredible players, but none have proven to have the heart, dedication, and humility of Tyler Wong. Over the past 5 seasons, Tyler has proven to be the undisputed leader of the Hurricanes- exemplifying all the qualities necessary along the way.

When Tyler was drafted 101st by the Hurricanes in the 2011 Bantam Draft, the team was going through a lot of trials on and off the ice. Over this time, many players demanded trades and left. However, Tyler never did. He remained loyal to this team and this city, and continually played his heart out each night. Over the years to come, he continued to play with the same passion at both ends of the ice. This resulted in him becoming the Hurricanes' 25th captain in 2015-16, and also increasing his offensive output yearly- which ended with Tyler co-leading the WHL with 51 goals in the 2016-17 season. He has also proven to be a clutch performer when it mattered most, specifically, when he scored the game winning goal shorthanded in overtime of Game 7 of the 2016-17 WHL Eastern Conference Semi-Final against the Medicine Hat Tigers, a moment that will go down as one of the greatest ever in franchise history.

More importantly, Tyler has set an incredible example off the ice in the community. Apart from signing autographs and taking pictures with every fan who asked, Tyler also was a humanitarian leader in the community. He has participated in uncountable visits to the elderly and to sick children in the hospital, he has volunteered as an instructor at minor hockey practices, and he also supported the "Hurricanes Spread Christmas Cheer" initiative, which helped support numerous Southern Alberta food banks. Most notably though, he founded the Canes KidSport program in 2015-16, which has raised over $19,000 for the charity in the two seasons it has operated. For his efforts, he won the 2015-16 WHL Humanitarian of the Year- an award which he is currently a finalist for again this season.

Although no player has ever had their number retired by the Hurricanes, it makes perfect sense for Tyler to be the first. There has been no Hurricane player ever who has had the impact Tyler has had both on and off the ice. There is a reason why he has been voted the Fan Favourite in each of the full five seasons he has played in Lethbridge- something no other player has ever accomplished. He is the true exemplification of what it means to be a Lethbridge Hurricane, and for that reason, #5 should never be worn by any Hurricane ever again.

Please sign this petition, to request that Tyler Wong have his jersey retired by the Lethbridge Hurricanes at next year's home opener. For a player who gave us everything he had, it's time that we did something for him in return. There has never been another player who deserves this honour more, and likely never another one who ever will.

Most career goals among all current WHL Players: 143 Goals

Second most points among all current WHL Players: 298 Points