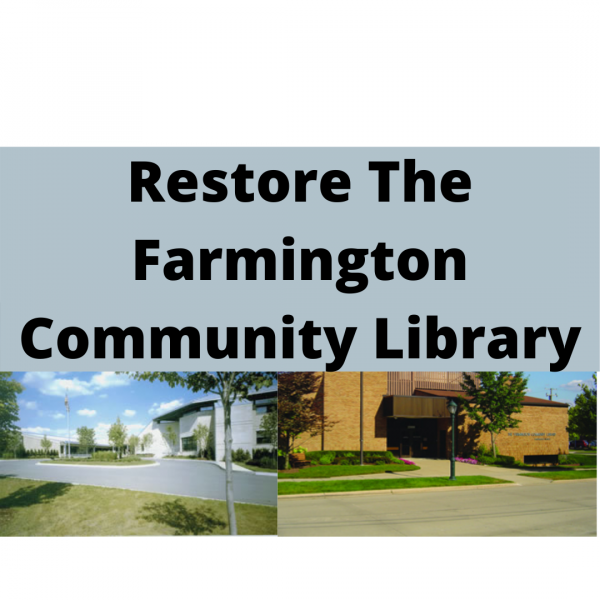 Restore Our Library 0 Comments
1429 signers. Almost there! Add your voice!
95%

We request that Bill Largent be removed from his position as Library Board Trustee due to his combative and hostile actions that have created a toxic setting and not only hinder, but actively destroy the ability of the staff and library, as a whole, to offer adequate services to their patrons.

A brief history would show that over the previous three years, the past Mayor of Farmington Hills, Ken Massey, unethically appointed Bill Largent to the Library Board whom he was openly critical of. His approach to the job was intimidating, demeaning and disrespectful to all the board members. One by one, all but one of the Library Board resigned, citing that the board had become “toxic” and there was a “significant impact” on staff morale.

Staff grievances have been disregarded.

Staff have been name called.

The former Library Director resigned after her attempts to work with the Library Board were met with unprofessionalism and hostility.

Mr. Largent has repeatedly made hostile comments to and about members of the public who have attended board meetings.

Mr. Largent has been unable or unwilling to account for the usage or reallocation of public funds and has demonstrated multiple times that he is unaware of the difference between the financial operations and responsibilities of a library versus a for-profit business.

The new incompetent director was selected, we suspect, to be a complicit puppet for the library board, despite staff wishes for another candidate.

The majority of library staff were furloughed on April 24 at Mr. Largent's direction, in an effort to "save money" that was already guaranteed to the library through a dedicated millage.

Mr. Largent has routinely rallied to strip staff of their benefits while on furlough.

Mr. Largent has micromanaged the new director, and prevented her from being transparent to the public actively silencing her during meetings.

As such, we request the removal of Mr. Largent, a member of the FCL Library Board of Trustees in favor of somebody competent and capable of keeping the library and the public it serves best interests as a priority.