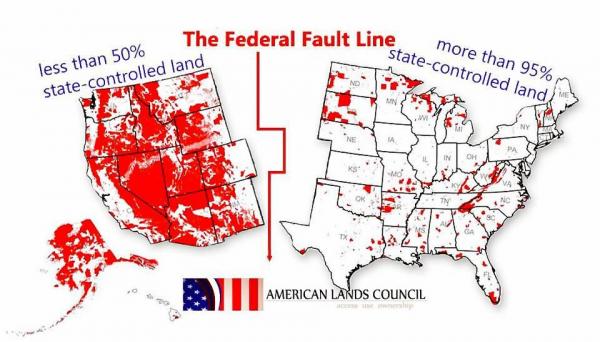 578 people have signed this petition. Add your name now!

Whereas, The federal government promised all newly created states – in their statehood enabling contracts – that it would transfer title to the public lands;

Whereas, This promise to transfer title to the public lands is the same for all states east and west of Colorado;

Whereas, The federal government honored this promise with Hawaii and all states east of Colorado and today controls on average less than 5% of the lands in those states;

Whereas, The federal government has failed to honor this same promise with UT, MT, WY, CO, NM, AZ,ID, NV, WA, OR, CA and AK and today still controls more than 50% of all lands in these states (more than 67% of the state of Utah);

Whereas, The Supreme Court of the United States declared these enabling act contracts to be“solemn compacts” with enforceable rights and obligations on both sides;

Whereas, Public lands previously held in trust for the individual states were managed for their resource value prior to the passage of FLPMA;

Whereas, After the passage of FLPMA our public lands are instead being managed perpetually and predominantly for only their conservation value;

Whereas, Local,state and national economies are all being adversely impacted by the loss of use of the natural resources thus being managed;

Whereas, Payment in Lieu of Taxes (PILT), Secure Rural Schools (SRS), and other public transfer payments are financially inadequate, have been unreliably funded and do not adequately compensate the States for the breach of their Enabling Acts;

Whereas, The United States Supreme Court case Hawaii v. Office of Hawaiian Affairs,speaks to the proposition that the Congress cannot by subsequent, unilateral action alter or diminish the rights conferred upon a state in consequence of its admission to the Union;

Whereas, Under the guise of “sequestration” to cut federal expenses, the federal government is cutting western states’ revenues in the form of PILT, SRS and FML (Federal Mineral Lease) cutbacks;

Whereas, States east of Colorado pay billions each year to subsidize western states to not use their lands and resources to educate their own children and care for their own communities;

Whereas, The resulting increase in catastrophic wildfires is needlessly killing millions of animals and destroying habitat and watershed for decades;

Whereas, The Institute for Energy Research discovered in 2013 that there is more than $150 trillion in mineral value locked up in federally controlled lands;

Whereas, In 2012 the United States Government Accountability Office testified to Congress that there is more recoverable oil in UT, CO, and WY than the rest of the world combined locked up in federally controlled lands; and Whereas, Opening only 8% of the coastal plain of ANWR in Alaska would provide billions of dollars to the Federal treasury, create more than 500,000 jobs nationwide and add between 9-16 billion barrels of oil to our nation’s supply;

Whereas legal analyses by the Sutherland Institute,The Federalist Society, and a recent BYU Law Review Article all conclude that the intent of the parties, the text, and the context of the statehood enabling acts, obligate the federal government to dispose of public lands;now therefore be it

“Where socialized ownership of land is concerned,only the USSR and China can claim company with the United States.” John Kenneth Galbraith

Additional information and references are available at: