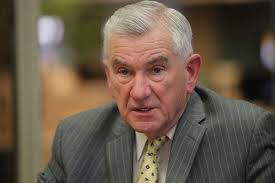 New York State Regent Emeritus Robert M. Bennett has presided over education in the Western New York region for nearly twenty years. He carries out the policies and the will of the NYSED, Chancellor Merryl Tisch, and Commissioner John King. If the Buffalo Public School system is a failure then it has been under Emeritus Bennett's watch. Regent Bennett is the local authority on privatization and the dismantling of public education in WNY/ NYS. After twenty years he is ineffective. It is time for Emeritus Robert M. Bennett to resign as WNY Regent and return control of education back to the local decision makers. Privatization, charter schools, the Common Core, standardized testing, and data sharing are not desired by majority of WNY stakeholders. Sign this petition asking NYS Regent Emeritus Robert M. Bennett to resign after twenty years of failure. Send a message. Return education power back to the local citizens.