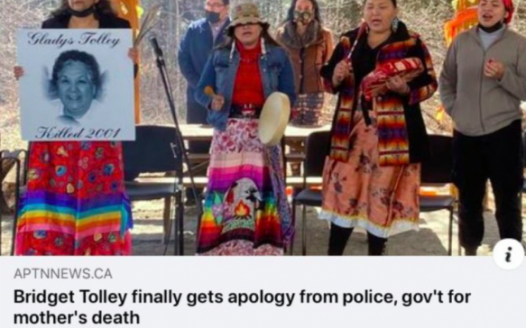 CALLING FOR THE RESIGNATION FOR CHIEF OF POLICE PAUL MCDOUGALL

8 MONTHS AFTER APRIL 22, 2022 APOLOGY MEETING WITH MINISTER NO WORD FROM KITIGAN ZIBI POLICE.

The family's lawyer Virginie Dufresne-Lemire said she's been working on the case for a few years, studying all the options available, and realized an apology is what the family needed.

"The fact that the communication was so mishandled at the time, it creates a feeling of injustice," she said.

"That mistrust, that feeling of injustice, has been building for 20 years. For these representatives of government institutions to come forward and to come to Kitigan Zibi, it's not something that is usual for them to come and to listen and to apologize. I think that's a first."

FIRST ~ HE IS AFRAID TO MEET WITH MY FAMILY. 21 YEARS NOW.

SECOND ~ HE WAS AFRAID TO MEET WITH QUEBEC MINISTER OF INDIAN AFFAIRS, REPRESENTATIVES FROM PUBLIC SAFETY & THE SPVM MONTREAL. 20 YEAR OLD CASE THE Kitigan Zibi POLICE WERE INVOLVED IN BIG TIME.

THIRD ~ CHIEF OF POLICE BLOCKED ME ON KITIGAN ZIBI POLICE PAGE FOR TELLING MY TRUTH & HE RATHER TAKE OFF ON DAY OF MEETING TO GO TO A GRADUATION INSTEAD OF MEETING WITH MINISTERS AND OUR FAMILY.

NO ONE KNEW PAUL MCDOUGALL LEFT THE SCENE WITH HIS WIFE AND CAME BACK HALF HOUR LATER WITH HIS POLICE UNIFORM ON EVEN THOUGH HE KNEW IT WAS HIS FIRST COUSIN THAT STRUCK & KILLED MOM !!!!

Paul McDougall identified mom when he came back to scene....