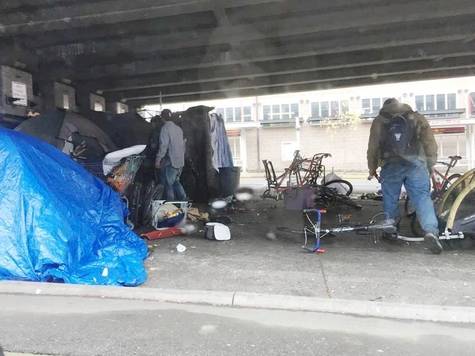 Require Seattle and King County to Provide Accurate Information, Transparency and Accountability on Homelessness to Better Serve the Homeless and our Neighborhoods!

1. Create, maintain and publish on a publicly available website databases identifying up-to-date information regarding the homeless epidemic, the City and County’s responses, expenses incurred year to date and the efficacy of various programs, including as follows:

a. all shelter beds available in Seattle and King County at any given time, (see “Available Shelter Database”, Table A);

b. data on all known unauthorized homeless encampments within the City and/or County updated at least once a week, (see “Known Unauthorized Encampments Database”, Table B);

c. information on public funds spent and to be spent in addressing the homelessness crisis updated at least once a month, (see “Homelessness Accountability Database”, Table C);

d. specific numerical data on homelessness, the populations affected and the efficacy of City and County programs updated at least once a month, (see “Homelessness by the Numbers Database”, Table D);

2. Immediately and without further delay commence removal of Known Unauthorized Encampments where an adequate amount of shelter beds are available as identified in the Available Shelter Database in compliance with existing laws and codes, in a prioritized manner that addresses the safety of the unsheltered individuals as well as the surrounding neighborhoods;

3. Commit resources to monitor and prevent future or recurring unauthorized encampments with a goal for removals to be performed within at least one week of first report where adequate amount of shelter bed are available as identified in the Available Shelter Database; and

4. Submit legislation regarding the location of all proposed temporary homeless encampments to the registered voters of the City of Seattle and King County for approval or rejection at the next regular election or at a special election in accordance with Article V, Section 1 of the City Charter and Article 2, Sections 230.40 and 230.50 of the King County Charter.

Purpose of this Petition

The purpose of this petition is to provide accurate and up-to-date information, transparency and accountability on the issue of homelessness and public funds spent to address it. City and County residents and businesses deserve to have accurate, verifiable and up-to-date information to ensure that public money is being wisely spent on efficient programs that produce demonstrable results.

One year ago, the Mayor declared a homelessness “state of emergency” and doubled spending. Since then homelessness has only grown worse. The City estimates there are approximately 250 unauthorized tent encampments within the City limits. Now the City’s homelessness budget for 2017 is increasing another $12 million and this after taxpayers approved a levy of $290 million to provide at least 20,000 affordable housing units. With this amount allocated to help 10,000 individuals, the City and Council should be able to shelter those in need while protecting our parks and neighborhoods.

The current homeless crisis infrastructure is a fragmented system with around 500 different service contracts and a myriad of publicly funded service providers. It is extremely difficult for the public to determine the extent of the problem, City and County action, where and how public funds are being spent and to ensure public funds are being spent wisely. The information from one source is often disputed by others. An example is the frequent statements that there are no available shelter beds and the public statements made by the United Gospel Mission and Salvation Army that they do have beds available.

The public deserves to be provided with verifiable information, transparency and accountability for public funds spent to make sure they are being spent wisely and effectively. The current infrastructure makes it extremely difficult to locate this information as it is maintained by numerous City and County agencies and their contractors.

People belong in homes, rehab facilities, mental health facilities or other places where they can get the help they need, not in tents without heat, electricity, running water or suitable protection from the elements.

The City and County residents and businesses are generous and want to help those in need while keeping our neighborhoods, parks and public spaces safe and beautiful for everyone to use.

Purpose of “Homelessness by the Numbers Database”, Table D:

Purpose of Requiring a Public Vote for Additional Authorized Encampments

Background of Homelessness in Seattle

In April 2005, King County produced a set of guidelines and commitments designed to end homelessness within ten years, hereinafter referred to as the “Ten Year Plan.” http://lawfilesext.leg.wa.gov/biennium/2005-06/Pdf/Bills/House%20Passed%20Legislature/2163-S2.PL.pdf

During the ten years following the creation of the Ten Year Plan, the City of Seattle and King County spent hundreds of millions of dollars each year to address homelessness.

Between January 2012 and January 2015, the one-night homeless count increased each year. http://www.homelessinfo.org/what_we_do/one_night_count/

In November 2015, Mayor Ed Murray declared a “State of Emergency on Homelessness” and vowed to address homelessness in a more effective manner. Expenditures on homelessness were doubled to about $50 million. http://www.seattle.gov/homelessness#by-number

The Mayor has advised reporters that 80% of the current unsheltered homeless population are addicted to opiates such as heroin and that the homeless population is soaring. http://www.kiro7.com/news/local/why-homelessness-has-grown-worse-a-year-after-mayors-emergency-declaration/463322328

The City of Seattle is also experiencing increased crime. http://www.seattletimes.com/seattle-news/gun-violence-rapes-show-seattle-needs-to-hire-police-not-defund-them/. http://web6.seattle.gov/mnm/policereports.aspx. The North Precinct Police Advisory Council reported, on November 3, 2016, that property crimes were up significantly from the prior year overall, with residential and non-residential burglaries up 23%, car prowls up 21% and car theft up 6%.

1. Implement programs and “national best practices” that have been shown to work in other cities;

2. Develop and require all publicly funded homeless service providers to use a database to provide more effective crisis response, accountability for all programs, reduce duplication of effort and to identify programs that are and are not working so that funding can be quickly moved to programs that work; and

3. Phase out and remove all tent encampments, authorized or not, because they are relatively expensive and ineffective in moving individuals out of homelessness.

In October 2016, Mayor Ed Murray, in direct opposition to the national experts’ recommendations, declared Seattle will open for four additional authorized tent encampments, one or two of which will allow its residents to use alcohol and illegal narcotics. http://mynorthwest.com/422196/murray-new-seattle-homeless-plans/. The City has been moving forward on these proposals without input or approval by City residents or businesses.

Now a year later, homelessness, particularly unsheltered, is growing in Seattle and there has been no clear accountability on how the $50 million was spent. Further, while homelessness is increasing dramatically in Seattle, the national trend is actually decreasing.

a. Shelter name and full address

g. Criminal record/ activity rules (identify whether the facility will accept individuals with a criminal record and whether there are restrictions on criminal activity, substance use (alcohol, marijuana, illegal substances) or other behavior)

b. Estimated Occupancy (number of individuals living in encampment)

b. Service Provider(s) name and address

d. Amount paid year to date to each Service Provider

i. Average Time: Average length of time services were provided per individual assisted by each Service Provider prior to transitioning into permanent housing

a. Total estimated homeless population, including sheltered and unsheltered individuals

b. Unsheltered individuals estimated in Seattle and King County