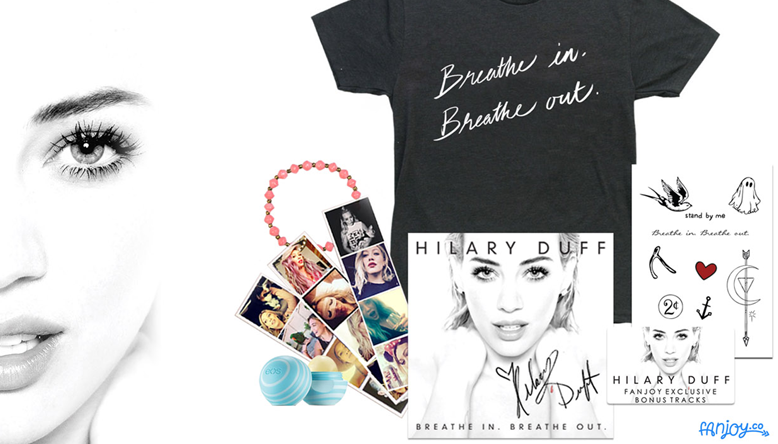 Requesting the Fanjoy edition of "Breathe In. Breathe Out." by Hilary Duff have 2 additional original songs added.

On May 27th of this year, Hilary Duff announced via Twitter that she was partnering with the Fanjoy company to release a new addition of her album "Breathe In. Breathe Out."

As advertised on HilaryDuff.com, the banner used to promote the package includes the words "Fanjoy Exclusive Bonus Tracks". The Fanjoy website uses the verbiage "4 Bonus Tracks to Download". This mislead fans to believe that the 50+ dollar package would be including 4 original songs that have yet to be released.

The Federal Trade Commission states: "When consumers see or hear an advertisement, whether it’s on the Internet, radio or television, or anywhere else, federal law says that ad must be truthful, not misleading, and, when appropriate, backed by scientific evidence."

We call RCA Records & FanjoyCo to add two additional bonus tracks to the download card for the June 16th release of "Breathe In. Breathe out." due to the pretense of false marketing.

Hilary Duff has recorded the following songs in which 2 could be selected: 17, Before The Light Changes, Better Days, Breathing Room, Carry On, Falling, Feel Alive, Hurts, If I Fall, It All Starts Tonight, Northern Star, Snow Globe, Take It For What It Is, Tearing Down Walls, This Heart, When We Were Young, Whistling Dixie, Wherever We Go, Wild Night Out, & Where The Gods Play.

Please add two additional songs to the Fanjoy edition of "Breathe In. Breathe Out." for its June 16th release. Thank you.