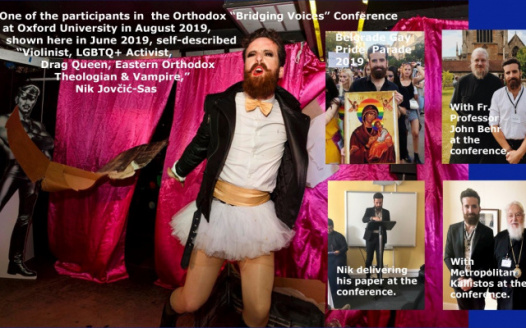 Your Beatitude, Eminences, and Graces:

We thank God for you, our shepherds, and look to your paternal wisdom on a matter that causes us distress. Many of us in the laity and in holy orders have grown increasingly concerned about what began as a quiet, though seemingly determined movement within Orthodoxy, to introduce a heterodox understanding of same-sex attractions and other related matters. Please let us explain our dismay further.

Some of us, either converts from other ecclesial bodies, or cradle Orthodox who are aware of what has happened there, have recognized this movement for some time. We note familiar strategies and rhetoric when we attend academic gatherings, read articles in publications and website organs, and discern the nuances of Orthodox revisionists on the subjects of morality and human sexuality. Some of us have engaged fellow Orthodox academics on these matters, who expressed views clearly contrary to Scripture and Holy Tradition. Some of us have attended closed-door sessions where we were astounded to find ourselves in a distinct minority. Some of us have regretfully departed from parishes where the priest teaches in a questionable way on these matters, or quietly invites those engaging in sexually immoral behavior to the Chalice. Some of us have had to encourage dis-spirited Orthodox friends who are tempted to give up on the Church because they see it going the same way as countless mainline denominations and the world. Some of us have been asked what is going on by friends outside of Orthodoxy, and have been chagrined that these, who once were interested in the historic faith, believe that the Orthodox Church is following other mainline bodies into decay. Others of us have been unaware of what is going on until recently. This is because until the past few years any Orthodox leaders, academic or ordained, who have dissented in thought or practice from Holy Tradition in the area of sexuality have been cautious in airing their views publically. This cautious campaign, however, is apparently becoming more confident.

We can see growing boldness especially since 2016. In conjunction with the Orthodox Council convened in Crete in 2016, several papers from groups of academics were published in Public Orthodoxy, some of them implying that a change needs to occur in Orthodox teaching and practice. Then in the summer of 2018, The Wheel produced papers in which three highly respected and ordained academics made subtle but questionable suggestions.[1] Finally, there was an “international academic gathering of scholars, pastors, clinicians, and other experts [that] took place in Oxford from 16th to 19th August [2019], at which contemporary issues of sex, gender, and sexuality were discussed in relation to the Orthodox Church” (description taken from the press release). “Bridging Voices” was described as “ground-breaking,” since it went beyond the smaller gathering in Amsterdam 2017, including “Orthodox clergy from multiple jurisdictions, LGBTQ+ activists, and clinicians,” as well as “ecumenical observers.” The release types the participants as varied, representing a spectrum of opinions, when in fact the number of traditional participants was minimal, both among Orthodox and non-Orthodox attendees. It also does not divulge that one of the “LGBTQ+ activists” describes himself as a “violinist, LGBTQ+ activist, drag queen, Eastern Orthodox theologian, and vampire.”

Attached are pictures of this individual, seen in his occupation as a drag queen, giving his paper to the “Bridging Voices” conference, posing with two eminent clergy academics, and displaying a desecrated icon of the Theotokos. This “theologian” also runs a blog called “Orthodox Provacateur,” complete with lectures posted to Youtube. Our point is not to single him out, but to question why his voice would be put on a level with others, given his self-representation (easily available on Facebook and Twitter). Until very recently, “pro-gay” arguments have been mounted in Orthodox circles as pleas for quiet, respectable same-sex arrangements which might curb promiscuity.[2] “Bridging Voices,” however, congratulates itself on “creating a hospitable context in which all participants…could express themselves and be heard and seen in their full, complex humanity in process of drawing nearer to Christ.” There is no suggestion that any rebellious view or provocative action could indicate a movement away from Christ. Moreover, the “drag queen” Orthodox theologian has now posted pictures of himself at the conference, further validating his position.

The news release also carefully states: “[A]ll participants attended in a private capacity and the Church hierarchy was not involved in a formal capacity. This arrangement, together with strict observation of the Chatham House Rule, ensured that all participants could speak freely, without fear of misrepresentation.” However, it seems to us that clergy (and Orthodox laity, too!) are never “private” but always members of the body of Christ. This is especially true when the gathering in question publishes a public statement, however general. Secondly, if these church leaders sincerely hold the views that they do, there should be no need for secrecy. Chatham House Rule allows for the participants to divulge their own material, to speak generally about the discussion, but not to say what anyone else has said. Certainly, those holding conservative positions who work in the current secular environment may worry about reprisals. We wonder, however, about the need for secrecy so far as Orthodox clergy are concerned. It seems to us that the motive for silence is to protect from criticism or discipline leaders of the Church who hold “private” revisionist positions, and who perhaps engage quietly in activities contrary to Church teaching (e.g. unofficial blessings of same-sex unions). To cloak the discussion in secrecy while at the same time publically celebrating its “ground-breaking” nature is to raise fears and questions among those who were not present, whom we represent.

We understand that Jesus “ate and drank with sinners,” and engaged in theological discussion with St. Photini at the well. However, we fear that this is not that, since we hear no command to “go and sin no more,” nor a correction of theology. Instead, the modus operandi of this gathering was to level all views and actions alongside those of the faithful, who obviously also sin, but strive for integrity. “Bridging Voices,” partially sponsored by the UK government, adopts the world’s approach to diversity, without honoring the historic voice of the Church.

Bishops and fathers, we are very grateful that our various jurisdictions have put out formal declarations about same-sex behavior and the nature of marriage. But the crisis we face cannot be alleviated by mere statements. Some of those participating in the revisionist movement indeed repeat these official statements, while also contemplating how same-sex arrangements (short of marriage) might be blessed. Others admit those in unrepentant same-sex relations to the Chalice, or cast doubt on the Church’s formal stance by suggesting that it may change in the future. The formal declarations are flouted when some of our clergy and more of our academics (some ordained) do not embrace them, but, by their writing and speaking, undermine the Church’s wisdom.

We are aware that an overture was made at the latest OCA All American Council asking the bishops to speak again with clarity, and regret that this appeal was dismissed as unnecessary or misplaced. Indeed, it is our sense that laity and clergy in all jurisdictions are in need of further clear teaching and direction from the bishops. We beseech you to hearten us and to illumine your people, by doing everything within your power to publically correct those who are under your authority who reject or question Church teaching on these matters, and to encourage your brothers to do the same. Also helpful at this time would be some specific guidelines for parishes regarding the pastoral direction both of those who self-identify as “GLBTQ+,” and those who cast doubt upon, or speak against the Church’s teachings. We feel that such strong actions for the truth are essential to retain the integrity of the Church, as well as to maintain our loving and truthful witness to those Orthodox who are in error, and to those who do not know Christ.

We remain immensely grateful for your leadership, and are praying for you in these difficult times.

Asking for your blessing!

[2] See the comments of Metropolitan Kallistos Ware in his June 2018 foreword to Summer 2017 issue of The Wheel. (For an analysis of this piece, see “Ambiguity Serves No One,” by Edith M. Humphrey in https://orthodoxlife.org/contemporary-issues/kallistos-ware-homosexuality-humphrey/).