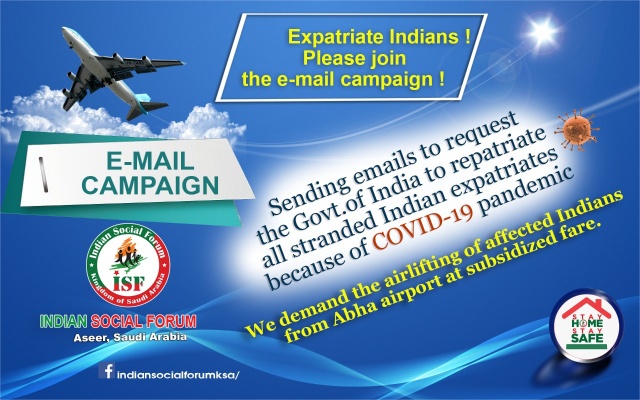 Request the Govt. of India to repatriate all stranded Indian expatriates of Southern Region from Abha Airport at subsidized Airfare

To: Consul General of India, Jeddah

We, Indian community in south region, Saudi Arabia express our sincere gratitude to the govt of lndia for scheduling special flights for bringing the stranded and needy lndian expatriates to home.

Simultaneously, we would like to request your kind attention to expand the evacuation airports to include Abha of southern region of Saudi Arabia, due to the following reasons:

• Considerably large numbers of expatriate Indians are working in the cities of Abha, Khamis Mushayt, Jizan, Baish, Najran, Bisha, Mahayil and Namas of South Region. The unprecedented Covid19 situation has adversely affected the employment and the income of many Indians, who lost their jobs as the business establishments have been closed. Besides, there are many patients, pregnant ladies, old men and women who want to return to India as soon as possible.

• Moreover, the three airports - Jeddah, Riyadh and Dammam – are set as the evacuation points, but they are very far for those in south region. Traveling 700 - 1400 km by road to reach these airports will be very difficult for the old, weak and sick people and those who lost their jobs with no money to pay for the transportation either.

• Considering the above circumstances, we request you to seriously consider including Abha airport in the evacuation points for expatriate Indians in Saudi Arabia with necessary approval from the Ministry of External Affairs and the concerned authority of Saudi Arabia because Abha is located in the center of the South region and easy accessibility from all cities of the this region.

Thanking you and look forward to receiving your favorable action.