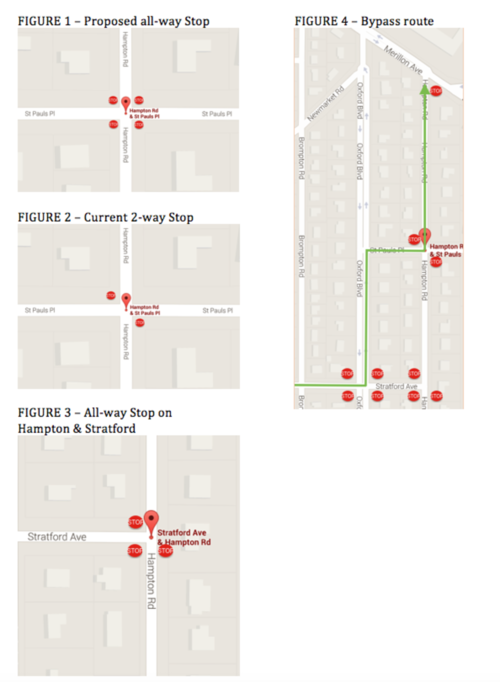 We are writing to you as concerned neighbors and parents in the area around the St. Pauls Place and Hampton Road intersection. We feel this intersection is dangerous, and that two additional stops signs should be added to make it an all-way stop. [See Figure 1] This intersection serves as two bus stops for Stratford and Hemlock Schools, and it’s a common route to/from the High School and Old Country Road.

Currently, there are two stop signs on Hampton Road stopping only the traffic traveling north-south between Merillon and Stratford Avenues. There are no stop signs on St. Pauls Place for traffic running east-west between Oxford Boulevard and St. Pauls Circle. [See Figure 2]

We have witnessed too many near accidents at this intersection, even multiple incidents daily. Most cars on Hampton Road do not realize the intersection is not an all-way stop. Thus, cars stop only briefly before proceeding quickly across St Pauls Place, as traffic is approaching from either side. The cars on St. Pauls run full speed through that intersection, often stopping abruptly to avoid a collision. The children who use that bus stop now cautiously stand back from the intersection in the event of an accident. A car could easily be pushed toward the sidewalk or debris from the collision thrown, putting them in harm’s way.

A few months ago, an additional stop sign was added at the corner of Stratford Avenue and Hampton Road to create an all-way stop [See Figure 3]. This intersection was equally dangerous to what we are describing above since there was ambiguity over the right of way for traffic traveling north-south on Hampton Road and cars traveling eastbound off of Stratford Avenue. While that intersection is now dramatically safer with the additional stop sign, one consequence is that cars try to bypass the intersection by turning on to Oxford Boulevard then St Pauls Place and lastly onto Hampton Road to Merillon Avenue. [See Figure 4] Since there are no stop signs between Stratford and Merillon Avenues along this route, cars often drive in excess of the speed limit, making it very dangerous for those along that path.

We would like to formally request that your office make the intersection of St Pauls Place and Hampton Road an all-way stop in order to alleviate the dangerous situation that exists. This will ensure that cars in each direction come to a stop, encourage more reasonable speeds through the intersection, and provide additional order to the flow of traffic. We are available to discuss this further, and appreciate you taking the time to address this matter for the safety of the children and families in that area, as well as the drivers who pass through daily.

Thank you in advance for your consideration.