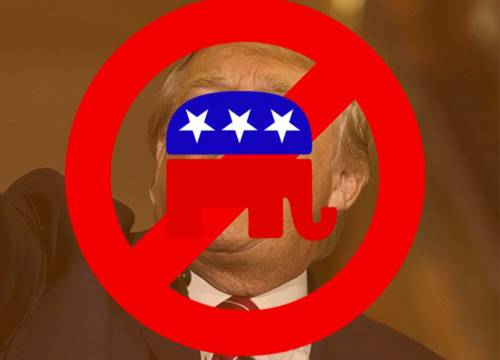 3500 people have signed this petition. Add your name now!

→ The Republican Party has a proud record of choosing individuals of good character, honor and decency as its nominees for the Presidency, starting from John Charles Fremont and Abraham Lincoln, from Theodore Roosevelt to Calvin Coolidge, from Dwight Eisenhower to Ronald Reagan,

→ Donald Trump has demonstrated an appalling lack of honor, integrity, decency, honesty, civility and respect for his primary opponents and members of their families throughout the course of his campaign,

→ Donald Trump continues to demonstrate a juvenile level of ignorance on the Constitution, the separation of powers, the duties and functions of the various branches and divisions of American government and basic issues of foreign and domestic policy,

→ Donald Trump's personal history is one of excess, vice, and moral turpitude, including cheating on his spouses and sleeping with the spouses of others,

→ Donald Trump continues to engage in rhetoric that is both vulgar in language and often encouraging of his supporters to respond to provocation with violence,

→ Donald Trump has deliberately courted and encouraged the active support of white supremacists, segregationists, 9/11 'Truthers', 'Birthers' and other fringe elements and hate groups,

→ The continued presence and participation of these fringe elements and hate groups in support of Donald Trump, with his encouragement, will leave an indelible taint on the reputation of the Republican Party for decades to come,

→ The use of similar vulgar, insulting, misogynistic and disrespectful language, crude attacks on person and family, and the deliberate peddling of disproven falsehoods and conspiracy theories and other such reprehensible behavior by Donald Trump against the Democratic candidate will, unlike during the primaries, be aggressively challenged and condemned for public consumption by liberal members of the mainstream media,

→ Every single Republican in the country will be put in the untenable decision of having to defend the indefensible behavior of Donald Trump, or be forced to disassociate their campaign from the top of the Republican ticket,

→ Donald Trump is rightly viewed very unfavorably by every major demographic, including a majority of Republicans, such that he is behind the Democratic candidate by two digits in the nationwide polls and in the polls of every swing state, and, in addition, has rendered the Democrats competitive up and down the ballot even in heavily Republican states, including the key state of Texas, and states as solidly Republican as Utah,

→ Only 6% of General Election voters split their tickets; the presence of Donald Trump at the top of the ticket for the Republican Party risks the wholesale destruction of the party's strength down the ballot at all levels of government, in every state across the nation,

→ The final decision on who shall receive the Presidential nomination belongs to the delegates at the National Convention,

→ The only true obligation of a delegate, being a representative, is not to vote merely to ratify the choice of a plurality of Primary voters, but to vote based on the delegate'sown conscience and judgment in the best interests of the nation and the party, in that order,

→ The Republican Party's convention and nominating rules and bylaws can be altered at will,

→ The Republican Party's convention and nominating rules and bylaws are not a suicide pact,

→ Donald Trump is, by any criteria,manifestly unfit to be President of the United States and Commander-in-Chief of its Armed Forces,

WE, THE UNDERSIGNED, hereby submit our demand that another person be given the Presidential nomination. We demand that he or she must be a person of good character, a man or woman of honor and decency. We urge, but do not demand, the delegates to avoid any distracting intra-party political considerations, set aside any previous candidate preferences, and instead seek out an individual from among the ranks of our nation's retired Admirals and Generals, who has served their country with honor and distinction, and who is well versed in matters of national security and foreign policy.