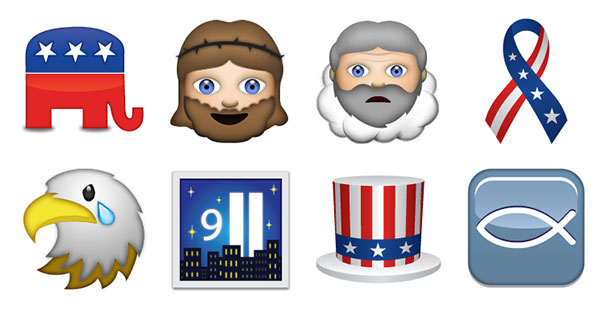 Every day more more young people communicate using a visual alphabet known as the Emoji. These icons are used to express feelings like the popular smiley faces :-) and an increasingly wide range of concepts.

Like many influences coming from Japan, Emoji have a strong liberal bias. Not only Christian and patriotic images are missing, but some are openly advancing the gay agenda: homosexual men holding hands and rainbows. Even a muslim can be found in your children’s phones.

The P.C. liberals already forced unicode to introduce more “diverse” skin colors and the next version of the alphabet will even include a satanist sign along with the long awaited Christian cross.

We are a group of designers who intend to build support for the introduction of eight new emojis: the GOP symbol, Jesus, God, a multi-purpose patriotic ribbon, a bald eagle, Uncle Sam’s hat, an embryo, and the ichthys, the ancient symbol of Christianity.