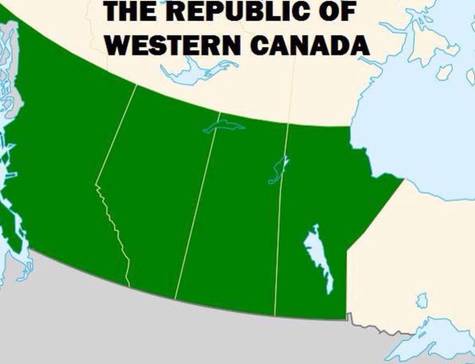 Support the Republic of Western Canada

For decades Canada's western provinces have been regarded as a cash cow for the east. It has been particularly bad during Liberal governments. Who can forget the National Energy Program that nearly killed Alberta? For years the battle cry was "The West Wants In!" and finally when the west was allowed to play the eastern elites made sure that western representation was regarded as racist, backwards and "an assault on democracy".

We now have an eastern dominated Liberal government in place, another Trudeau. He is mentored by Gerald Butts who is solidly anti oil and anti west, together they will start to destroy the west's resource based economy, killing tens of thousands of jobs and opportunities in favour of their pet projects designed to make their friends rich.

They will flood our lands with tens of thousands of largely unscreened immigrants, many of whom could be terrorists in sheep's clothing looking for an opportunity to strike our homes and families. Are we willing to take that risk to satisfy eastern elites who just want to feel good about themselves while others bear the burdens?

Not Again, No More!

Are you interested in the possibility of forming a new nation built on rule of law and common sense with a strong economy and the profits of our labours staying here?

Sign our petition, pass it around, tell your friends, and tell Canada we're serious about our homes and families.