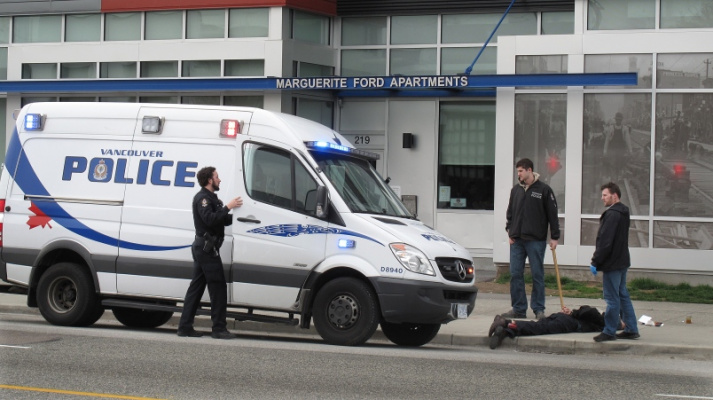 South East False Creek Residents Petition to the Mayor and Council of City of Vancouver to:

Some of loudest interruptions followed RainCity associate director Isaac Malmgren’s comments that experience at other sites has shown neighbours enjoy positive relationships with residents of supportive housing when we move into communities. There’s no evidence of increased crime rates and, actually, police calls decrease… property values don’t decrease. This is something that gets put around a lot but it’s just not true - Sean Eckford Coast Reporter Jul 17, 2019.

Require RainCity Housing to sign a Good Neighbour Agreement with the City of Vancouver for the Marguerite Ford Apartments just as the City of Coquitlam did.

A copy of the 'Good Neighbour Agreement for the Operations of a Transitional Housing and Emergency Shelter Building at 3030 Gordon Avenue, Coquitlam, British Columbia' as signed by RainCity Housing and Support Society and the City of Coquitlam is available here. This document was included in a report to Council on January 13, 2014. That report is available here.

Under RainCity Housing's management the Marguerite Ford Apartments is a sad example of a failed supportive housing model. Low barrier and no sobriety means that residents are allowed to be active drug users. Without an intensive care management team on site, an actual drug addiction program and an ongoing mental illness treatment program in place the Marguerite Ford Apartments is unsafe for its own residents and the surrounding community.

17 days before a resident's body was discovered and Coroner was notified that a resident had died in the building.

Residents of other municipalities opposing supportive housing in their neighbourhood point to problems at Marguerite Ford Apartments in Vancouver.

BC Housing criticized the City on how the building was being managed - Travis Lupick Georgia Straight Nov 9, 2016.

City of Vancouver's agreement with B.C. Housing calls for a minimum of 20 per cent of the units to be made available to tenants identified as service level three. That agreement classifies service level three tenants as people who don’t engage with treatment or support services, have poor housekeeping and are susceptible to hoarding and poor hygiene. They have an extensive criminal history indicating high risk to re-offend, can create security problems through aggressive and intimidating or intrusive behaviour and have an inability to sustain personal relationships. As well, they are prone to frequent conflict with others, poor communication skills and history of property damage - Mike Howell Vancouver Courier Jan 9, 2018.

In addition to Sole Food Street Farms, the City of Vancouver will be building a temporary modular housing building at 595 West 2nd Avenue and just announced a skate board park at Cambie and 2nd Avenue.

CITY NOW WANTS TO BUILD A TEMPORARY MODULAR HOUSING BUILDING AT 215 WEST 1ST AVENUE. DON"T WE HAVE ENOUGH OF THESE PROJECTS IN OUR NEIGHBOURHOOD.

The Petition of the Undersigned, Concerned False Creek Residents, of the City of Vancouver, BC states that they are opposed to the continuation of RainCity's management of the Marguerite Ford Apartments located at 215 West 2nd Avenue, Vancouver, BC (corner Cook Street).

The Petitioners also request that the Mayor and Council order the immediate replacement of RainCity Housing as the manager of the Marguerite Ford Apartments and that the City monitor to ensure a safe and clean neighbourhood.