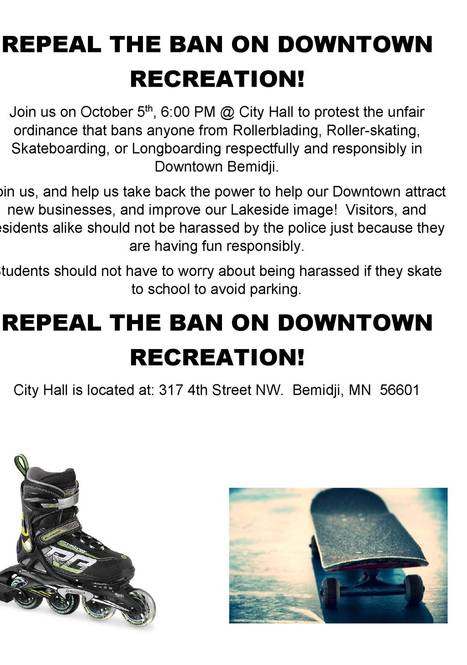 The City of Bemidji passed an ordinance banning the use of skateboarding, longboarding and rollerskating/rollerblading several years ago. We are proposing the below amendments to this ordinance.

Note: You may need to refer to the original ordinance to follow through each amendment.

a. This is unfair for anyone who uses rollerblades, roller-skates, skateboards, and/or longboards to travel. This is especially unfair for those who live downtown, and have no other means of transportation.

b. This could potentially harm Bemidji’s downtown image, say if someone were to be cited, have their equipment confiscated, and given "probation" for recreating peacefully. What if that person goes home and gets their harassment published? That could cost Bemidji much money, and most likely, much more tourism.

c. If skateboarders are causing property damage, they should be cited, and charged by the property owner. Just by having a roller-blading/skateboarding ban isn’t going to stop property crime, but it will punish law-abiding citizens who don’t feel the urge to flee the police.

d. Rollerblading and Skateboarding are good for a lake-side city’s image. Tourists seeing young people having fun downtown will most likely boost sales, and encourage people to have more fun.

e. The downtown ban on rollerblading and skateboarding violates the constitutional rights of any rollerblading or skateboarding retail stores downtown. This is a violation in the Domestic Commerce section of "The Commerce Clause," the dormant aspect. This ban hinders and obstructs those retail stores from doing business, and hinders their right to fair commerce. Who is going to buy a skateboard, or rollerblades, when you can’t even use them? Who is going to come to Downtown Bemidji to open a new Sporting Goods store when their customer’s equipment is being confiscated, or their customer’s being harassed? According to the Supremacy Clause: "If there is a conflict between federal and state statutes, the federal law preempts the field, meaning it controls the issue. The state law is void."

a. Longboards and skateboards are completely different in function.

b. Longboards are exclusively for transportation purposes, and are impossible to cause any more property damage than any bicycle, or motorized vehicle.

c. Most longboards do not have the contour or concavity of a regular skateboard, thereby rendering it useless for any activity other than transportation.

3. Repeal any mention of rollerblades, roller-skates from ordinance.

a. This is a hockey town, rollerblading should be encouraged!

b. This is a tourist town, rollerbladers (and long boarders) increase the positive lakeside image, and could boost attraction.

c. If I were to ask any resident in town, or anyone on the street, maybe 1 in 10 people would even know that rollerblading is prohibited. The other nine would ask why? None of the people I asked knew about this.