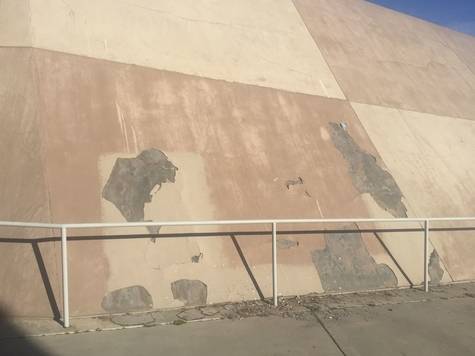 399 people have signed this petition. Add your name now!

We, the occupants and users of the Arts building at UC Riverside are dissatisfied with the current condition of the building. It is in disrepair in several key areas. The facade on the south facing side is crumbling, falling apart and has terrible mismatched patch jobs. The planter on the main floor has been empty for many years due to leaks and has never been properly addressed. For some time it had a plywood cover which was a temporary patch that eventually warped, looked terrible and was removed. There are sandbags strewn around the grounds for months, if not years without any suggestion that they will be removed. There are now evidently rats and other vermin in the building. This presents potential health hazards. The ground in several areas is deteriorating badly. This great building, designed by the late Frank Israel, is now an eyesore. The building is an embarrassment to the public face of the university and its hard working occupants. In addition to the deterioration, there is an ongoing neglect to keep the grounds clean and tidy. The outdoor hallways are often filthy. Windows are dirty. Dust builds up in many areas. We do not notice other buildings on campus showing this egregious degree of neglect. We are asking for a clear plan of action by the administration to repair our building in a lasting and intelligent fashion (not patch jobs and bandaids), and for a plan for more rigorous upkeep. We are requesting that these issues be addressed and remedied by no later than June 1st, 2017.