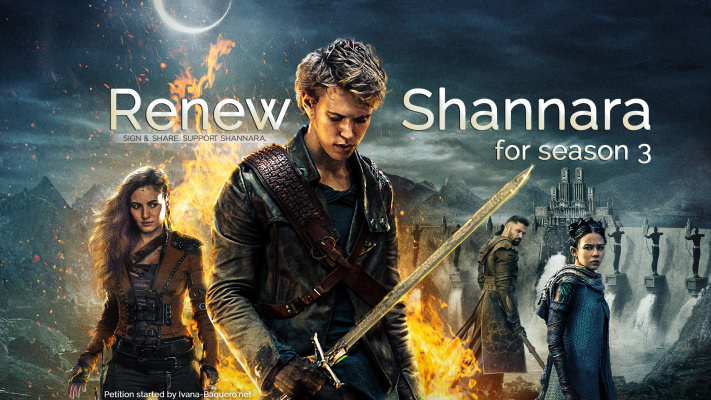 Renew 'The Shannara Chronicles' for season 3

Join us, the #ShannaraArmy, to let the network know we want them to renew 'The Shannara Chronicles' for season 3.

The Shannara Chronicles is based on the best-selling fantasy book series by Terry Brooks. The series follows heroes in the Four Lands as they embark on a quest to save the world. Thousands of years after the fall of humankind and the world's fate rests on the shoulders of an unlikely group lead by half-elf Wil, who knows nothing of the great destiny that runs through his veins.

If you have watched the show then you know it's an action packed fantasy series that appeals to both genders and all ages. The series is driven by survival, destiny, and even romance. The cast is talented and diverse, and the female characters are strong, independent and totally bad-ass. Which is refreshing because its something television in the 21st century is lacking and in desperate need of.

We, the Shannara fans, are asking the network to give the show a Season 3.This petition is to show the support The Shannara Chronicles has behind it. We believe in the cast and crew, but more importantly we believe in the show itself. There is so much story left to tell.. let them tell it to us.

Please sign the petition and share it with other to show support for the show and your interest in a third season. Let's show the network we want a season 3 (and preferably one longer than 10 episodes!). As seen on Shannara, you only need a loyal, strong, and powerful bunch to make a difference and Shannara fans are just that.

IMPORTANT NOTE: After signing the petition it asks if you would like to donate money to the petition site. DO NOT DONATE MONEY. We don't want your money. The option to turn that off is not available to us. Just close the window when you reach that screen. I repeat, do not donate money.

Note to fansite owners: Please help us spread the word by adding a link to our petition on your fansites. Please use the hashtags #RenewShannara and #ShannaraArmy when posting on social media to help spread the word.

4/8/2020 UPDATE: We know the show will not be back. We know.. but the petition will still stay active to show support for the wonderful cast, crew, and writers. You are all genuine fans and we thank you for joining us on this plea.

Ivana and James will be doing a Shannara Chronicles 5 Year Reunion on April 11 (1pm PST) with as many cast members as they can get together. Join in on the festivities on Ivana's Instagram. - Fangirls Jay and Kay