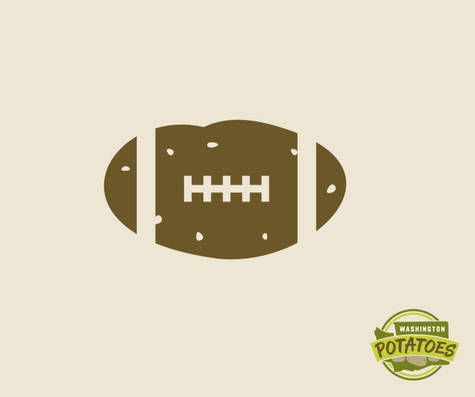 For more than 100 years football fans across the State of Washington have enjoyed one of college football’s greatest rivalries. The annual meeting between the University of Washington Huskies and the Washington State University Cougars is always one of the biggest sporting events of the year. Since 1962 they have been competing for a chance to win the Apple Cup. Prior to 1962 the teams played for the Governor’s Trophy.

Of course apples are great but it seems like the arbitrary change might have not been the most appropriate name for the trophy of the state’s main football rivalry. For example, did you know that potatoes were first grown in Washington way back in 1792? Whereas apples weren’t grown in our state until 1826! Also, the average American eats about 19 pounds of apples a year. Compare that to a total of 112 pounds of potato products consumed annually by those throughout Washington and beyond. Also Malusdomesticaphobia is clinically defined as the fear of apples. Have you ever heard of anyone ever fearing a potato?

These are just a few reasons why we are asking you to sign our petition asking for a change from the Apple Cup to the Potato Cup. By signing our petition you can help make the Potato Cup become a reality while also helping food banks in Washington state. For every “Go Cougs” that accompanies a signature in our comment section we will donate one pound of potatoes to Second Harvest in Eastern Washington. For every “Go Dawgs” in our comments with a signature we will donate one pound of potatoes to Food Lifeline in Western Washington.

Now we aren’t asking for this honor forever, but only for one year. Also, knowing these things take time to put in place we are asking that the 2018 game between the Huskies and Cougars be officially named the Potato Cup. We are looking for at least 5,000 signatures. Let us all work together and have the prize for the 2018 match up of our state’s main collegiate rivalry be the most meaningful trophy ever.