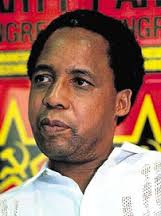 “Chris Hani touched the very heart of millions of us because he knew our pain, and eased it by giving us hope, giving us courage, giving us a way forward.”Nelson Mandela

After completing his studies in the Eatern Cape, Chris Hani arrived in the City of Cape Town where he joined his father in Langa.It was in Cape Town that Chris Hani joined the SACP and then volunteered for Umkhonto we Sizwe, the army he was eventually to serve as its Chief of Staff. He received his first military training at MK's clandestine camp on a farm near Mamre, before leaving South Africa in 1962 and undergoing formal military training in the Soviet Union. After active service in the Wankie Campaign (Rhodesia, 1967) he returned to South Africa in 1974 and worked underground in the Western Cape as well as other parts of the country, before again having to flee the country, while continuing the work of building the underground inside the country from Lesotho.

We hold therefore that there is particular association to Chris Hani to Cape Town and the Western Cape which adds relevance to the proposal to name the City's and Province’s only international airport after Chris Hani. But foremost in support of our proposal is the merit it remembering in this way a leader of our people in successive phases of their struggle for liberation.