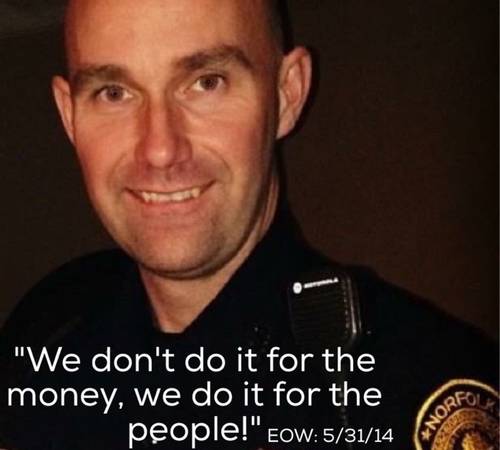 1441 people have signed this petition. Add your name now!

Many have said that they have donated via this site. That money does NOT go to this petition, but to the platform of ipetitions.com. The family is not asking for, nor does it expect anyone to contribute funds.

Officer Brian W. Jones: navy veteran, dedicated family man, and public servant was killed in the line of duty, serving as a Norfolk city Police Officer on May 31st of 2014.

Since then, a temporary memorial has stood at a nearby stop sign on Wellington Road. It was removed for a short time by an over-zealous civic league leader who thought it was an eyesore and that the community should just "move on".

After an incredible outpouring of support from the community, the memorial went back up, and has stayed there ever since. Officer Jones' children often stop by the memorial just to stand in reflection of their fallen father.

The purpose of this petition is to persuade the City of Norfolk to rename the road on which Officer Jones was killed, or to consider at least adding a honorary sign to the official road sign in his honor.

There are hundreds, if not thousands of young lives that were affected and even changed through the life and ministry of Officer Brian Jones. He was indeed an incredible community servant.

Officer Jones was not one to seek attention for his actions. He often was heard saying "we don't do it for the money, we do it for the people!" and that is a quote he lived by.

The city should permanently honor his legacy by renaming a road in his honor.

*You can also contact city council and politely express your support for renaming a road after Officer Jones at: City.Council@norfolk.gov

**Any questions and/or comments should be directed to Jonathan Morris at: Maddisonsdaddy2015@gmail.com