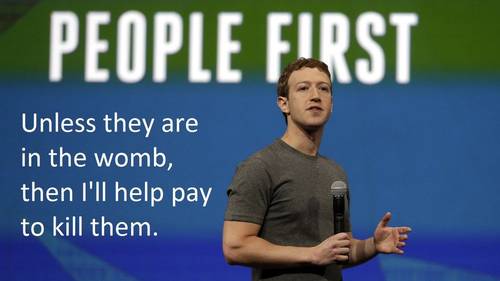 Please remove Mark Zuckerberg from his position as Facebook CEO, and from any and all Boards he sits on due to his support of Planned Parenthood.

The Real Il Conservatore
14 people have signed. Add your voice!
1%

It has come to our understanding that Facebook CEO, Mark Zuckerberg, has made a 992 million dollar donation to Planned Parenthood , money which was used to kill unborn children by decapitating their limbs, crushing their skull and smashing their other body organs before ripping them out of their mother’s womb in pieces.

On a similar note, Brendan Eich, Mozilla Co-Founder and CEO was forced to step down as CEO of Mozilla Corporation and leave his post on the Board of Directors of the Mozilla Foundation, when it was discovered that he donated money in support of Traditional Marriage via proposition 8.

The difference between the two is quite simple. Eich’s money wasn’t used to kill or decapitate anyone. Mark Zuckerberg’s money was donated knowing full well that much of that money would be paying for the murder and decapitation of innocent human beings.

Brendan Eich’s donation to proposition 8 was not involved in the taking of anyone’s life, not even one, while Mark Zuckerberg is directly responsible for the taking of over 300,000 human lives by his funding of Planned Parenthood with $992 million dollars.

We, the undersigned on behalf of the American People, in the interest of anti-discrimination and social justice, demand that Mark Zuckerberg not receive treatment that is any different from the treatment that Brendan Eich received.

Mark Zuckerberg is directly funding the decapitation and murder of innocent unborn children. A man such as this, a man who financially supports the commission of such evil actions, is not fit to serve as CEO of any company or serve on any board of directors, and must be removed.